As a wealth manager, inflation plays a key role in how Moneyfarm operates. It’s a large part of the reason our customers invest in the first place, with inflation-beating returns being the name of the game over the long term.

In the UK, inflation is currently the highest it’s been in a generation, but what’s causing the spike in prices? In this article, we’ll take a look at inflation over time, examine the various causes for rising prices and explain how it affects other parts of the global and local economy.

Before we dive into the causes, let’s explain exactly what we mean by inflation. Put simply, inflation is the general increase in the price of goods and services over time. So, £10 in 1980 would have bought you far more than it does today. In fact, £10 in 1980 was worth the equivalent of £34.65 in 2021. 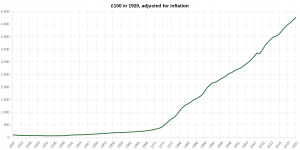 This means that, over time, each individual pound or dollar is worth less than it was in the past. The chart above shows how the equivalent of £100 has changed over time. You can use the Bank of England’s inflation calculator to see how much inflation has impacted the buying power of the pound over time.

Generally, the Bank of England aims for a rate of inflation akin to about 2% per year. This is a manageable increases in prices, with wages able to keep up and avoiding any big shocks to family budgets. For a number of reasons, however, this is not always achievable. 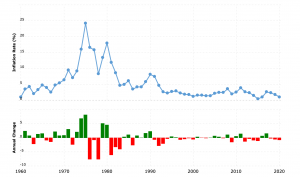 The chart above shows inflation rates over time. In the UK, the 1970s famously saw spiralling inflation, caused primarily by a tripling of fuel prices and rapidly rising wages. From the early 1990s to 2020, inflation didn’t top 5%, despite slight rises in the aftermath of the 2008 financial crash.

It’s important to note that this chart stops at 2020. The impacts of Covid-19 and the invasion of Ukraine have ushered in a new era of high inflation in the UK (and elsewhere). Inflation reached 9% in the 12 months leading up to April 2022, a figure that may be topped before the year is over.

What are the key causes of inflation?

So, let’s take a look at what causes inflation. There are, broadly speaking, five primary inflationary drivers. When spikes in inflation occur, it’s often a result of one or more of these drivers pushing up prices. Here’s a quick breakdown of the key factors:

Demand-pull inflation, put simply, is what happens when demand outpaces supply. Economists will often describe this as “too many dollars chasing too few goods”. The key factors that can cause demand-pull inflation are higher wages, increased consumer confidence and rising house prices (which creates a positive wealth effect).

Cost-push inflation is when prices rise as a result of increases in business running costs. For example, a spike in oil prices can affect businesses’ bottom lines, a cost which is then passed onto the customer. Higher costs of production can also decrease aggregate supply; this creates scarcity, which can lead to price hikes.

Devaluation is a little trickier to explain. This is the process of officially lowering the value of a currency relative for foreign reference currencies or a currency basket. What this means in practice is the deliberate diminishing in value of the pound or dollar, for example.

Another key trigger for inflation is rising wages. Ultimately, when wages rise quickly, businesses have higher operating costs and pass this cost onto the consumer. It has the added effect of puttng more money in the pockets of customers, meaning that prices can be increased. This played a key role in the extremely high inflation seen in the 1970s.

The final key trigger can occur as a result of other forms of inflation or as a result of speculation. When consumers expect prices to rise (having seen stories in the news, for example) they are likely to demand wage rises, which leads to further inflation as firms put up prices to counter the extra operating expense.

When inflation begins to rise or threatens to get out of control, it is generally the job of Central Banks to put measures in place to counter it. The implementation of these measures is known as “tightening monetary policy”, with “hawkish” policies like higher interest rates.

Higher interest rates make it more expensive to borrow, which reduces both investment and consumption thanks to the reliance on credit in both activities. This is one of the key tools in the arsenal of Central Banks when it comes to lowering inflation.

Equally, when a Central Bank wants to stimulate the economy, they don’t tend to simply print money and throw it into circulation. This is where bonds comes in. Instead, they buy government or corporate bonds to increase the amount of cash in the system which causes inflation). On the other hand, when they want to reduce the amount of money in the system (and slow inflation down), they sell bonds.

What brings inflation down?

Periods of high inflation do come to an end. This is ordinarily thanks to a combination of factors that slow price growth. These are things like reduced government spending, higher interest rates and a consumer desire to save rather than to spend. Generally, governments reducing money supply within an economy is the most common way inflation is brought down.

In extreme cases, the economy can enter a period of ‘deflation’. The opposite of inflation, deflation is when price growth reverses and they fall. The most recent example was seen between 2007 and 2008, during the Great Recession of the period.