Every year, some 220,000 marriages take place in the UK. This is a steadily declining figure; in the 70s, the number was in excess of 400,000, while the 40s saw as many as 500,000 ceremonies in some years. The trend isn’t linear but, broadly speaking, fewer and fewer people are getting married as the decades roll on.

There are a few different reasons for the decline. Changing attitudes to relationships have certainly played a part, but the financial side of the discussion cannot be ignored. Generally, people are not only less likely to get married, but also far more likely to get married later.

One of the biggest considerations when tying the knot is the cost. For a lot of people, financial security comes before a wedding in the list of priorities and, particularly in times of rising prices, the cost has a major impact on the decision.

In fact, Moneyfarm’s research found that over half (55%) described a wedding as “ridiculously overpriced”, with the same proportion predicting that the rising cost of living could mean that fewer people splash out on a big day.

So, how much does it cost to get married in the UK? In this article, we’ll share our research, break down the costs and figure out who should pay.

What is the price of a wedding?

Moneyfarm’s research shows that the average UK wedding now stands at a whopping £23,030, while a blowout bash can set you back an eye-watering £63,312. A paired down, budget ceremony, on the other hand, could be put on for as little as £6,213. 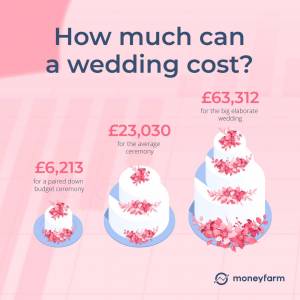 It’s little wonder that over a quarter of those surveyed (26%) admit they are delaying getting married as they’re completely put off by the cost of it all and one in two (49%) say they are now having to choose between having a big wedding or buying a house together.

These are eye-watering figures and it will be interesting to see how the marriage rate changes during the cost of living crisis the UK is currently experiencing. With everything growing more expensive and saving for a housing deposit becoming more difficult, will people choose to spend these kinds of sums going forward?

Who pays for a wedding?

Traditionally, the father of the bride has been seen as responsible for fronting the bill for his daughter’s wedding. This derives from a period, hundreds of years ago, in which women were seen as chattel and money was paid from the bride’s family to the groom’s in the form of the dowry.

Today, most people would consider this outdated – well, 52% of those we talked to. Nowadays, it’s largely a shared responsibility, with the bride and groom saving alongside their parents.

58% of people think the couple should take full responsibility for the finances, while 34% think that the couple and the parents should organise the finances together. Only one in five thought that it was still appropriate for the family of the bride to pay for everything.

How realistic is the big white wedding?

In times like these, it’s no surprise that two-thirds (66%) of Brits agree that more and more couples will likely have to settle for a smaller wedding in the future, as their families won’t be able to contribute as much financially.

Three in 10 now view the big, elaborate wedding as cheesy and cliché, with an intimate affair featuring close friends and family becoming more appealing and tasteful. Worryingly, however, over a fifth (22%) of those polled admit that their wedding is likely to put them into debt when they do eventually get married.

So, financial planning is likely to be the key to avoiding falling into debt and reducing the impact of the big day on the long-term financial plans of couples. If the wedding is some time away, it’s worth considering investing your savings to help them grow against the cost of living crisis we’re all facing – ideally in a diversified portfolio rather than languishing in a cash account.

With an eye for recouping some of the costs, however, six in 10 (61%) of financially savvy Brits admit that they’ll be asking for money rather than gifts when they walk down the aisle, with three in 10 crossing their fingers that it will help partly pay for their big day.

The research found that Brits who are already saving for their big day are trying to put away, on average, an eye-watering £285 a month. Moneyfarm’s calculations found that it doesn’t need to be that financially onerous if money is invested over the longer term.

Encouragingly, the research did reveal that over a third (34%) of the Brits polled confess they are already saving for their big day – despite not even being engaged yet.