After 100 days in office, veteran statesman and incipient president Joe Biden has overseen about as drastic an economic turnaround as you could imagine. After the Covid-19-exhausted doldrums of the late Trump era, there are green shoots developing that could represent the future redwoods of the US economy.

It’s unclear just how much of the recovery is Biden’s to claim – the economy was always likely to see a boom once Covid-19 was under control, regardless of who sat in the Oval Office. This will scarcely matter to Biden’s administration, though, as the nation and its composite communities begin to get back on their feet.

It’s against this backdrop that Biden’s $2 trillion American Jobs Plan is being shaped. Building on his already expansive American Rescue Plan, the latest announcement will see billions invested into infrastructure in dire need of modernisation as well as a conscious shift toward greener energy usage. Hundreds of billions are likely to be allocated to areas like transport, manufacturing and housing, as part of the biggest economic package ever approved by Washington.

Is a ‘Biden boom’ imminent?

Given the affectionate moniker of the “Biden boom”, the package has been heralded as a potential jumpstart to an economy renowned for its optimism and resilience. If Covid-19 forced businesses to hibernate, they’re seemingly ready to emerge and survey the land in search of opportunity. It’s fitting, perhaps, that we’re right in the middle of spring.

The notional ‘boom’ has been a speck on the horizon for months, a far off mirage that has taken shape alongside the once speculative exit out of lockdown. Biden’s sweeping announcement may have brought us closer to it, giving much-needed detail to the picture and providing reasons to be optimistic beyond that of mere survival.

There is a historical precedent behind the optimism. In the 1960s, President Kennedy’s supply-side tax cuts were passed, leading to over 100 months of economic expansion across the decade. US payrolls increased by a third over the period as government tax revenues soared. Sustained economic growth – such that the period is remembered fondly despite its many prevailing issues – is one of Kennedy’s key legacies, and it’s largely accepted that policy played a key part in it .

It isn’t difficult to imagine the difference that stimulus packages on this scale could make to economic activity. Indeed, the proof of economic recovery in 2021 can be found both in current figures and the projections of economists.

Forecasts of real economic growth for the first quarter now sit at around 7% or 8%, based on partial data. Significantly, the majority of economists seem to expect the positivity to continue over the rest of the calendar year. Figures from the IMF suggest an average forecast of 6.4% growth over the four quarters of 2021 in the US. In the UK, the figure is set to be around 5.3%. If the projections are accurate, this year will represent the best for growth since 1984, which also came after a deep recession.

The vast influx of federal dollars means that, across the US, households have been disproportionately saving their wealth. The average disposable income saving rate in the US before the pandemic was 7.5%. Over 2020, this figure jumped to a huge 16.3% – some $1.4 trillion in extra saving. This money will have to go somewhere once the economy fully opens up and confidence is recaptured.

The reaction to monetary policy decisions earlier in the pandemic cycle could be prophetic here. The Fed threw everything but the kitchen sink at the Covid-19 recession, decimating interest rates to historic lows. Did it stop US consumers from spending money? Not exactly. After the initial shock and the violent market corrections, economic activity in areas like house buying kicked on and actually rose.

Confident rhetoric from the Fed

There are a number of issues to bear in mind before we declare open season. Importantly, the virus could yet pull back lost ground if vaccines begin to prove ineffective against Covid-19 variants. Most notably, however, there are concerns that the level of easy money pumped into the economy could lead to inflation, while increasing national debt won’t necessarily sit well with everyone.

Mammoth environmental transition plans have forced the price of some commodities (like copper and industrial metal) upwards. The pandemic continues to wreak havoc in the global supply chain, with India – a crucial exporter of raw materials – now at the forefront of the pandemic. Specific products like semiconductors are in high demand, which the supply chain is struggling to meet. These are all factors that strengthen the narrative of those that think that the Fed will struggle to meet its commitment of not raising rates before 2023 – one of the more vocal detractors has been former Secretary of the Treasury Larry Summers. 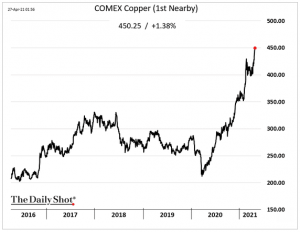 As ever, we tend to have faith in the Fed. While some investors are concerned that the reopening of the economy could lead to a jump in inflation, the central bank seems to hold the view that any spike would only be temporary. Rising US bond yields suggest that markets are fearing overstimulation of the economy, but this is a premature concern for a package that is this broad – it has a number of different targets, each of which will have its own economic impact.

Chairman Jerome Powell has been quick to talk down any suggestion that now is the time to think about tapering the Fed’s asset purchases. Striking a balance between anchoring inflation and achieving maximum employment will be the central bank’s chief concern in the short term. We’re not quite yet at pre-pandemic levels of employment – though we have come a long way from the peak – with around 5% now out of work. 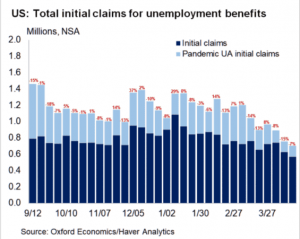 Just this week, Biden addressed congress for the first time after reaching 100 days in office. Pitching what he described as a “blue-collar blueprint” to rebuilding the American economy, his optimistic tone chimes with that of a hearteningly resilient market. The sweeping plans aim to create jobs and greatly expand the social safety net, all while modernising the infrastructure of the country – “America is on the move again,” Biden said. The future from here on is as opaque as it is optimistic, but the latter is welcome after a year of unbridled crisis.