What are we talking about? We’ve been debating how likely it is that Central Banks will actually be able to pull off a soft landing – reduce inflation back to their target without putting the economy into a recession. Our starting view has been that it’s pretty tough, given how high inflation is in most Developed Markets. Interest rates have begun to rise (and should rise further), but it’s fair to argue that the economy hasn’t yet felt the full impact. But the most recent data in the US suggests that a soft landing might be more plausible than we’ve assumed, even if markets suggest that the likelihood of a recession continues to rise.

First, the macro data from the US continues to be decent. The chart below shows the ISM Surveys for manufacturing and services. The surveys have clearly weakened, but remain above 50, suggesting that the economy is continuing to grow. 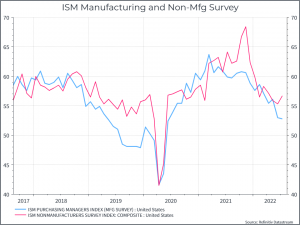 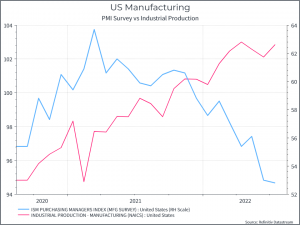 In terms of consumption, the chart below of retail sales (nominal and real) also suggests an economy that is yet to roll over.

But it’s not just a tale of economic resilience. The chart below shows US home sales and mortgage rates. Rising rates have had a swift impact on new home sales, and that should take a toll on the broader economy. 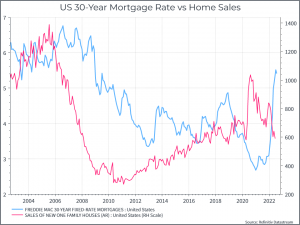 It’s also reasonable to suggest that the economy has barely started to react to tighter monetary policy. It usually takes several quarters for the impact of higher rates to work its way through the real economy. But we are beginning to see the impact on inflation expectations. The chart below shows market-based inflation expectations over time. The blue line shows the 12-month forward expected inflation, which has come down quite sharply over the past couple of months. The other two lines look at inflation expectations two and three years from now. It reflects improvements on the supply-side (lower freight rates, shorter delivery times) and likely slower demand. 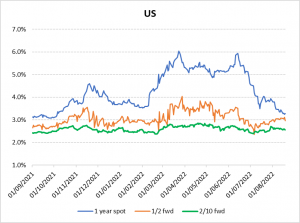 We can contrast this with the same chart for the EU. Expected inflation in twelve-months time has risen pretty steadily over the past few months. But somehow the market expects inflation to fall sharply over the next couple of years. 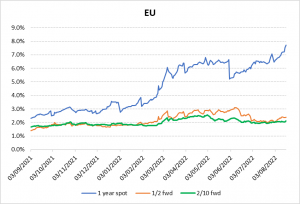 Where does this get us? As we’ve all said repeatedly, life is hard for Central Bankers. But resilient macro data and improving inflation indicators are an optimistic combination – and suggest at least that the US might be better placed for a soft landing than its peers elsewhere in the Developed World.