Currently, the biggest concern for most families in the UK is the increase in the cost of living. The last couple of years have seen crisis after crisis, from the pandemic to the war in Ukraine, the knock-on effects of which are price increases in everything from fuel to food. Global disruption is not limited to the duration of each crisis – and, indeed, the war in Ukraine is still developing – with the ripples being felt months down the line.

The key issue affecting the UK is inflation. Figures have been dizzying, reaching 7%, a level not seen since the 1980s. Current inflation is driven by a number of factors. Petrol prices increased by an average of 12.6p per litre between February and March. Household bills have also skyrocketed, with some 18 million households seeing their annual bill rise by an average of £693. VAT, rail fares and other tariffs have also increased.

We may not have reached the peak, either, with families bracing themselves for paychecks that won’t go as far as they have done in the recent past. Indeed, average salaries have also fallen for the first time this millennium, contributing to a cost of living crisis that we could still be talking about in many years to come.

Is the UK ready for a cost of living crisis?

The UK is one of the richest countries in the world – 6th in terms of GDP – but are individual households equipped to deal with a sharp increase in the cost of living? The short answer is no, not compared to other wealthy nations. If you look at Gross National Income per capita, the UK ranks in the mid-20s globally.

Of course, the UK is a wealthy country by most metrics, but this does not mean that individual UK households are. When you consider that nearly a quarter of the UK’s wealth is held by 1% of its population, the issue becomes a little clearer – there is staggering wealth on UK shores, but it is distributed incredibly evenly among the people.

So, we want to get a better picture of the scale of the cost of living crisis and what individual UK residents can do about it. To do this, we need to examine the real state of the UK economy and the ways in which shrewd personal financial planning can provide at least some defence against rising prices.

The situation around work in the UK

Taken at face value, the labour market in the UK is relatively healthy. At 3.7%, unemployment for those aged 16 or older hit its lowest point in 50 years from January to March 2022.

Equally, wage growth in the UK is at a decent level. Falling into negative territory during the first major outbreak of Covid-19, wages have been growing at a solid rate. 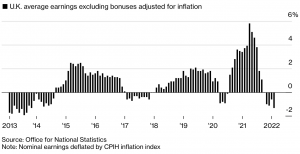 The problem comes when wage growth is measured against inflation. If inflation is rising more quickly than wage growth, the real value of people’s earnings goes down. With such high inflation in the UK, it’s difficult for wages to keep pace. In real terms, though ONS figures show three-month wage gains to be at 4%, this equates to a real-terms drop of 1%.

So, with wages failing to keep pace with inflation, households will feel the pinch over the coming months. For those with the means to save for the future, it’s now more important than ever to have a sound financial plan that takes a long term view. Inflation often manifests itself as the gradual erosion of cash savings over time; it’s vital to have a strategy in place to combat it when it reaches unsustainable levels.

Why GDP growth has slowed

Over the last 20 years, the UK has experienced two major shocks to GDP growth. The financial crash pulled GDP growth down to -4.2% in 2009, more than double any contraction seen in the last 50 years. Over a decade later, however, the spread of Covid-19 (and the measures put in place to control it) led to GDP growth of -9.4% in 2020.

Like in 2009, the UK was expecting a fairly swift recovery in GDP terms after Covid-19 was under control. The consensus GDP expectations for 2022 were somewhere around the 4.5% mark.

However, the outbreak of war in Ukraine has caused the growth outlook in the UK to deteriorate. According to estimates from PwC, for example, UK growth in 2022 is expected to be between 2.8% and 3.8%. The main driver of the revision is lower household spending, driven by higher commodity prices.

Expectations from the IMF paint an even more difficult picture for the UK going forward, with growth in 2023 predicted to be only 1.2%. This would give the UK the lowest growth in the G7, along with the highest inflation. Chancellor Rishi Sunak is rolling out measures to specifically counter the latter, with household fuel prices seemingly at the very top of his list.

The impact of the Chancellor’s latest package

Just this week, Chancellor of the Exchequer Rishi Sunak announced a package of measures to support households hit hardest by the sharp rise in the cost of living. The package is funded, at least in part, by a “windfall” tax on profits in the energy sector. The headline numbers are, according to the Treasury, around £15 billion of additional support, targeted at lower-income households.

According to the independent Institute for Fiscal Studies, it means that the median income earner will see their take-home pay stay roughly flat in real terms compared to last year.  Lower-income workers will see a higher real take-home income, relative to last year. Higher earners will see some benefit, but far less, as the chart below illustrates. The message from the government seems to be that these are one-off measures, but there could be more – presumably depending on how the economy develops.

It’s a measure that will take some of the stings out of the rising costs of living in the UK, particularly for those on lower incomes who need the support the most. For median earners, the change to yearly take-home will be negligible, while 75th percentile earners will see a fairly significant reduction.

On the margin, it’s probably supportive for growth – and the outlook for UK growth looks pretty weak at the moment – and for sterling, which has weakened against the dollar in recent weeks. Whether the measures will be enough to keep families afloat remains to be seen but it is promising to see some action after a period of apparent indecision.

Where does this leave us?

Put simply, it’s likely that inflation will remain a key topic of discussion for at least the next 18 months. The level in the UK for 2022 could read near 10%, according to the Bank of England. The Central Bank also expects levels to return to the 2% target within the next two years.

Covid-19 is still causing issues in some geographies – most notably in China – while the situation in Ukraine is still without resolution as it enters its fourth month. These issues have exacerbated rising prices and we’re still very much in the midst of an uncertain period in the UK.

For those with the means, it’s now more important than ever to manage wealth carefully and take a long-term perspective in your financial planning. Cash accounts are now a surefire way to erode the value of your cash over time, particularly when inflation spikes as it is at the moment. We believe that a balanced, diversified investment portfolio is the best defence against the erosion of cash holdings. There is volatility and risk inherent in investing, but the cash alternative is in an extremely difficult position.

It’s also an ideal time to seek professional guidance when it comes to your finances. For Moneyfarm customers, this means getting in touch with your investment consultant and assessing your current portfolio as well as discussing your options going forward. Our team of highly experienced portfolio managers will continue to monitor markets daily and make any necessary changes to aim for inflation-beating portfolios.

Why does the UK have a cost of living crisis?

As of 2022, the  UK has a cost of living crisis due to several factors, including higher inflation, labour shortages from Brexit, low wage growth, the Ukraine conflict, supply chain disruptions, etc.

Who is responsible for inflation stability in the UK?

The Bank of England controls the annual rate of the UK consumer price index (CPI) control and ensures price stabilization. The bank controls the inflation rate by increasing or decreasing interest rates.