In just a couple of short weeks, the US heads to the polls for what could be an era-defining election. Incumbent President Donald Trump takes on veteran and former Vice President Joe Biden in a race that is perhaps most notable for its ideological symbolism. Whoever wins, the impact on global investments is something worth keeping an eye on.

Who will win the election?

To get an idea of who is more likely to be in the White House in a few months’ time, we look at two data sources. First, Fivethirtyeight.com – the website of Nate Silver, who had success with a ‘poll of polls’ approach a few elections ago. The second, the Good Judgement Project, builds on the principles of Philip Tetlock (author of Superforecasters) – you could describe the approach as the ‘wisdom of an informed crowd’.

Things like elections are, typically, difficult to predict. It’s worth remembering that Hillary Clinton was polling ahead of Trump in the lead up to the 2016 election and won more votes on the day, but the latter was inaugurated the following January. Predicting a winner is an educated guess at best.

The polls (above) suggest that Biden holds a significant lead over Trump – almost 10 points at the time of writing. The ‘superforecasters’ concur, giving Biden an 86% chance of being elected, along with a 79% chance that the Democrats will control both the House and the Senate – the latter seemed unlikely pre-pandemic. 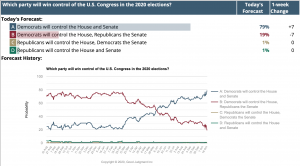 All of the signs seem to point to a Biden presidency and a remarkably strong Democrat performance. Of course, we’ve been here before, with Trump’s election in 2016 coming as a surprise to most – we should be appropriately prepared for that shock to repeat itself. Though any betting person would side with the probability of a ‘Blue Wave’, it’s only a hypothetical and Trump could yet win.

What would a Biden presidency mean?

So, with Biden seemingly the more likely candidate to be in the White House by the end of January 2021, what would his presidential term look like?

On a basic level, sweeping the House, Senate and White House would suggest that the administration will actually have some success passing its legislative agenda. Secondly, Biden has already proposed an increase in corporate income taxes from the current 21% to 28% – the Trump administration cut the headline rate from 35% to 21%.

There are various other proposals around increasing payroll taxes, taxes on overseas profits and possibly some sort of capital gains taxes. Estimates from the Bank of America predict that these measures could cut S&P 500 earnings by around 8-10% (see chart below). 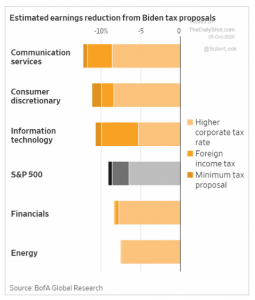 There is a prevailing expectation that there will be a significant fiscal stimulus package in an attempt to boost economic activity – though this is likely regardless of who actually wins. Some estimates put that package between $2.5 and 3.5 trillion. There is also talk of some (long-overdue) increased spending on infrastructure if the Democrats take control.

The most optimistic political commentator might expect a Biden presidency to begin healing the relationship with China, too, though this is problematic for a number of economic and political reasons¹. More realistic onlookers might expect that tariffs, at least, would be eased.

Finally, a Biden victory raises the likelihood of increased regulation on large tech companies – the notion that the likes of Amazon, Google, Facebook and Apple hold excessive power has been backed by Democratic lawmakers². The issue is considered “partisan” by Republican congressman Jim Jordan and a win for the Democrats swings the pendulum firmly towards regulation.

What this means for markets

What all of this means for global markets is difficult to predict, but there are a few key areas to look at when building a picture for the immediate and long-term future.

The New York Times recently claimed the markets have begun to ‘love Biden’³. Concerns around the rolling back of Trump’s tax breaks have, slowly, given way to a more positive outlook. Largely, the development of Covid-19 and the different responses being proposed by the Republican and Democrat camps has swayed the markets.

Earlier this month, a Goldman Sachs analyst wrote: “All else equal, such a blue wave would likely prompt us to upgrade our forecasts.” The piece points to the huge post-inauguration stimulus package and potential for long-term spending increases, with the combination having the potential to “at least match” the effect of the tax hikes⁴.

The situation is, naturally, not that simple. Higher growth as a result of fiscal stimulus could mean dollar weakness as it helps the global economy to strengthen. Opinion on US equities seems a bit more divided – some focus on the potential 10% hit to S&P 500 earnings, others place more weight on the power of fiscal stimulus to drive long-term growth and productivity.

Markets have seemingly come round to the idea of a Biden presidency. This enthusiasm may not last, with further waves of Covid-19 possible and these potentially zombifying the economy in the short and medium term. For now, though, concerns that a Democrat win would dampen corporate confidence seem to have been assuaged.

Things for investors to look out for

So, where does all this leave investors? Well, right now the situation looks stable. If investors are positioned reasonably conservatively, then the likelihood is that nothing significant needs to change until after the election, when it’s time to reassess.

Even so, here are some things investors should keep an eye on as things develop:

The US election is always about a lot more than economics. The Oval Office has a direct impact on everything from the environment to civil liberties and foreign policy. For markets and investors, a Biden presidency is looking more positive than it perhaps did a few months ago.

Polls can be deceptive and it would be a mistake to assume that Trump is already packing his bags – if politics has taught us anything over the past few years it’s to expect the unexpected. If the overwhelming weight of probability proves too much for the Republican campaign, though, there’s plenty to be optimistic about moving forward.