There have been some surprising movements in the currency markets in 2016. Based on macroeconomic theory, a decline in interest rates in a country should be followed by lower yields on that particular currency. This causes a decrease in demand for that currency as investors look to hold other currencies, this will decrease the value of the currency in question. However, the opposite seems to be true at the moment.

In 2016 we have seen that, despite negative rates in Japan and Germany (Eurozone), the Euro and the Japanese Yen have appreciated. On the opposite side, economies that are deemed stronger, like the United Kingdom and the United States, where interest rates are higher and monetary policy is less (explicitly) accommodative, depreciated. 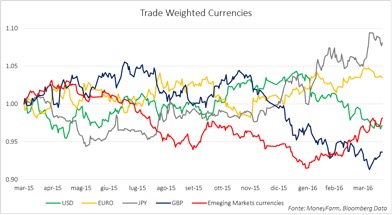 The positioning of major investors could play an important role in these counterintuitive movements. Fears of Brexit have meant investors have been shorting sterling (there are more sellers than buyers). Implied volatility (the volatility priced in the FX options market) is rising and there is an increase in demand for hedging strategies for the period around the referendum.

The US Dollar has recently depreciated in value. One reason for this could be that real interest rate (nominal interest rate minus the inflation priced in inflation-linked bonds) support for the Dollar has fallen in recent months, as US real rates have dropped in absolute terms and relative to those of other major economies. It is hard to imagine the Federal Reserve being a source of renewed support in the near term, it has maintained a policy of low interest rates despite a slight uptick in inflation and a rise in breakeven inflation rates. Until a change in Federal Reserve policy, any US Dollar strength will come from elsewhere (such as Brexit or Crude Oil).

The recent strength in the Yen has been driven by tumbling Japanese inflation expectations. These have driven real Japanese yields higher against both the US and European ones; even as nominal Japanese yields fall into negative territory. The strengthening in the Yen feeds deflationary pressures in Japan. Short of direct intervention, the Bank of Japan needs either higher inflation expectations or the Federal Reserve to adopt a higher interest rate policy, this could turn the relationship between the US Dollar and Japanese Yen around.

There was also surprise from the emerging markets currencies. After having lost more than 7% in 2015, they are now largely positive. Fundamental concerns around emerging markets remain, but there has been a marked improvement in the external environment. The weaker US Dollar has played an important role by pushing painful deleveraging further down the road, this has meant lending criteria is relatively relaxed and has contributed to the floor in crude oil (which has been the main driver of risk sentiment in 2016). Emerging markets currencies could continue to rally in the next few months as the next major risk events are in June.

Currency markets constantly move. Economic history and the performance of a fund in the short term are not always reliable for investors. It is important that investors manage the overall risk of the portfolio when exposed to a particular currency. To achieve long-term returns investors should look to have diversification in their portfolios and a balanced exposure to currencies.