Our Investment Team monitor the markets on your behalf, analysing market movements against the long-term goals of your portfolio, helping you stay one step ahead.

Despite a summer of volatility for financial markets, Moneyfarm Portfolios extended their positive run in the third quarter.

Government bonds benefited from a flight-to-quality and softer monetary policy from the US and European Central Banks. The global decrease in interest rates allowed longer duration inflation-linked bonds to outperform, providing a solid return for portfolios, despite Brexit delays weighing on near-term inflation expectations.

In the equity market, an escalation of trade tensions between the US and China sparked panic in August, before a tentative trade deal was struck between them. As a result, equities ended the quarter in positive territory.

Developed market equity was the main source of performance in higher risk portfolios during the third quarter. UK equity rose 0.9% and the US grew 1.7%, with Europe up 2.9% and Japan jumping 3.47%. Emerging market equity was most affected by the escalation in US-China trade tensions in the third quarter, although emerging market currencies went some way to offset this fall.

Moneyfarm’s model portfolios continued to perform well amid heightened volatility thanks to their diversified currency exposure, with safe haven currencies like the US Dollar (+2.8%) supporting the portfolio in the most crucial moments.

The IMF downgraded 2019 growth expectations to 3% from 3.6% last year, reflecting slower momentum in the US, eurozone, India, China and the UK.

With the US and China on course to be two of the three largest economies in the world by 2050, it’s clear why the temperamental trade spat can be so damaging. The ongoing drama has forced many firms to hold fire on any big investment plans until there is more certainty on trade deal specifics and the future of already imposed tariffs.

In the US, the manufacturing sector is feeling the brunt of this uncertainty. Growth nearly came to a standstill over the summer, with the industry losing 2,000 jobs between August and September. There are concerns that this weakness could spread and translate into slower earnings growth and put downward pressure on margins.

Weaker US growth expectations caused the US Treasury yield curve to temporarily invert in the third quarter. This is a sign that investors see short-term treasuries as riskier investments than longer-term treasuries – which usually demand a higher yield to compensate for the erosion of inflation and the higher risk of default.

America’s economy is one of the largest in the world. Its stronghold on the global economy has weakened over the last few decades, but its influence is still powerful. And, as the old adage goes, ‘when America sneezes, the world catches a cold’.

There are, however, many reasons not to panic. Firstly, improving economic prospects have already lifted the US yield curve closer to its textbook ‘normal’ curvature after the initial panic.

Then there’s the main driver of economic growth in the US; consumer spending. Personal consumption grew by an annualised 4.6% in the second quarter, offsetting weaker investment and exports. Outside of manufacturing, the outlook is positive, with record low levels of unemployment finally driving wage growth higher in the US, increasing the disposable incomes of US consumers, whilst household debt remains relatively low and inflation manageable.

Lastly, Central Banks around the world have adopted a much looser approach to monetary policy over the last year to stimulate slowing economic growth and avoid any short-term pain on the financial markets. With a full policy toolkit at their disposal, Central Banks should be able to navigate short-term geopolitical and macroeconomic uncertainties, and extend the longest period of economic growth on record. 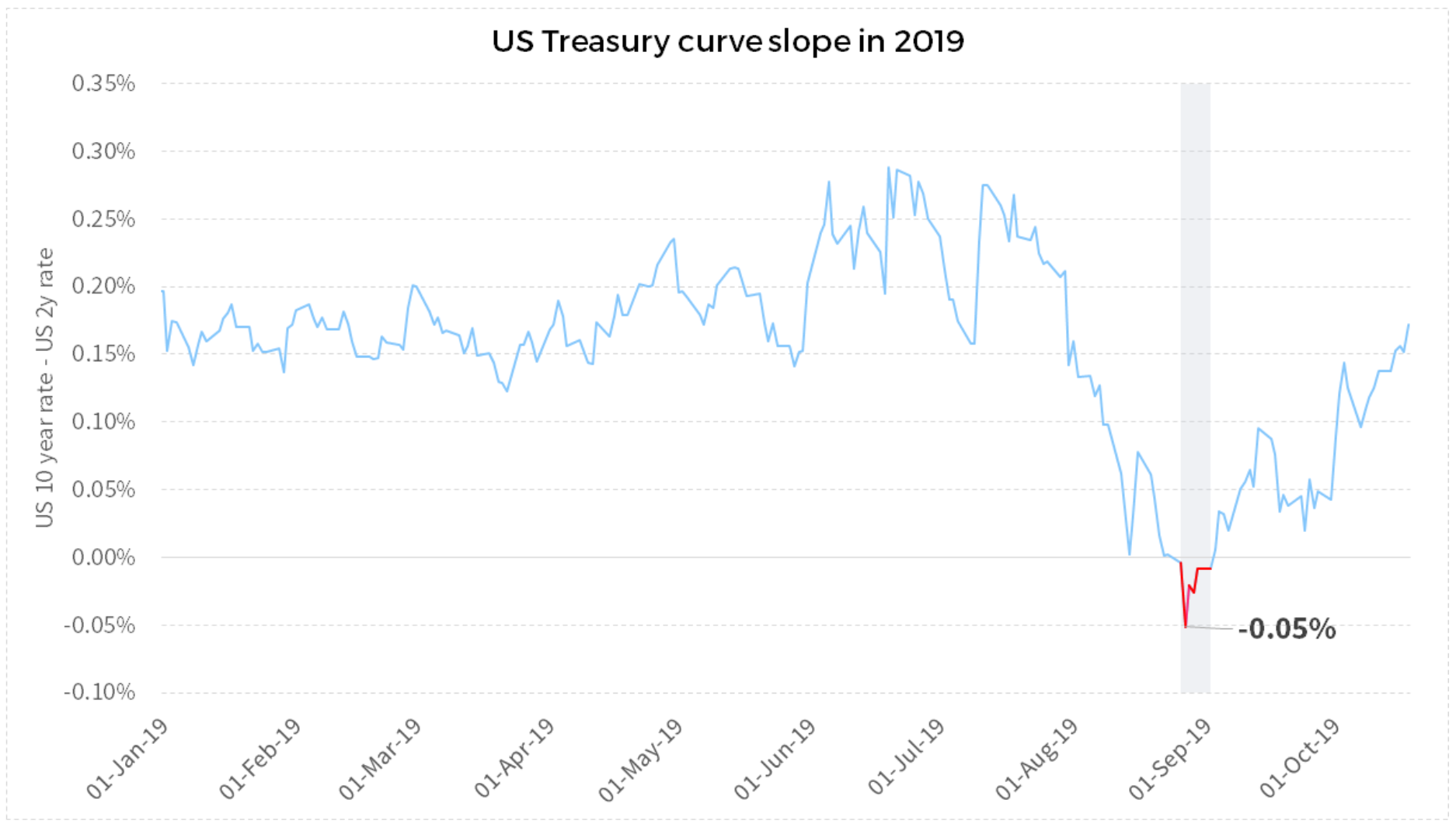 The last 12 months have seen Central Banks fall under increasing scrutiny against the evolving economic landscape. Faced with uncertainties of Brexit, global trade tensions and an economic slowdown, Central Bankers from the Fed and ECB have adopted a softer approach to their policy decisions.

This time last year, the US Federal Reserve was determined to roll out its monetary policy programme by hiking interest rates and tapering its quantitative easing (QE) programme. This caused panic on financial markets due to fears this approach could choke off economic growth, and as a result most asset classes entered 2019 in the red.

The Fed has since reassured investors by cutting interest rates twice in the third quarter. Whilst the European Central Bank (ECB) followed the Fed’s lead, the Bank of England has been patiently waiting for Brexit negotiations to play out before it commits to its next move in the game of monetary policy chess.

The market is now pricing in at least one rate cut from the Fed before the end of 2019, with a further two cuts pencilled in for next year.

As the economic backdrop evolves further, Central Banks can call on the other tool they have in their monetary policy arsenal; quantitative easing (QE). QE is used by Central Banks to boost spending and investment in an economy by creating digital money to purchase assets like government bonds.

The ECB announced a fresh round of quantitative easing to stimulate the European economy in the third quarter. There are growing concerns, however, that this won’t be enough to raise the EU out of its low growth, low inflation slump.

The Fed may also follow suit after a temporary upset on the US Repurchase (Repo) market in the third quarter, which saw the cost of short-term financing jump sharply. Signs of stress in these markets are generally seen as a warning for the economy and financial markets. This raised concerns that the Fed’s QE tapering has deprived markets of crucial liquidity. In response, the Fed intervened with a fresh line of credit.

Crucially, the Fed may now be poised to unlock a fresh round of QE in the short-term, although this could have important implications on long-term liquidity, inflation and growth.

Against this uncertainty, the third quarter served as a reminder that there are still many challenges facing the global economy. But against such a complex backdrop, Central Banks are once again prepared to use policy to stimulate the global economy. This should be enough to navigate the short-term uncertainties of trade tensions, Brexit and slowing growth.

If you’d like to discuss the performance of the model portfolios or want to know the thinking behind the Moneyfarm investment strategy, please call your Investment Consultant on 0800 4334574, or book a call.