After years of being stuck in the doldrums, oil is back in the limelight after it attempted to break above $80 a barrel this week. With a host of factors at play, are we going to see barrels trading above $100 any time soon?

Why is the oil price rising?

Like most dynamics in the financial markets, the price of oil is influenced by a host of different factors. Whilst the success of OPEC’s production-cutting programme has been celebrated, you can see from the chart below that macro economic indicators are also hugely influential, namely global economic growth and inflation. 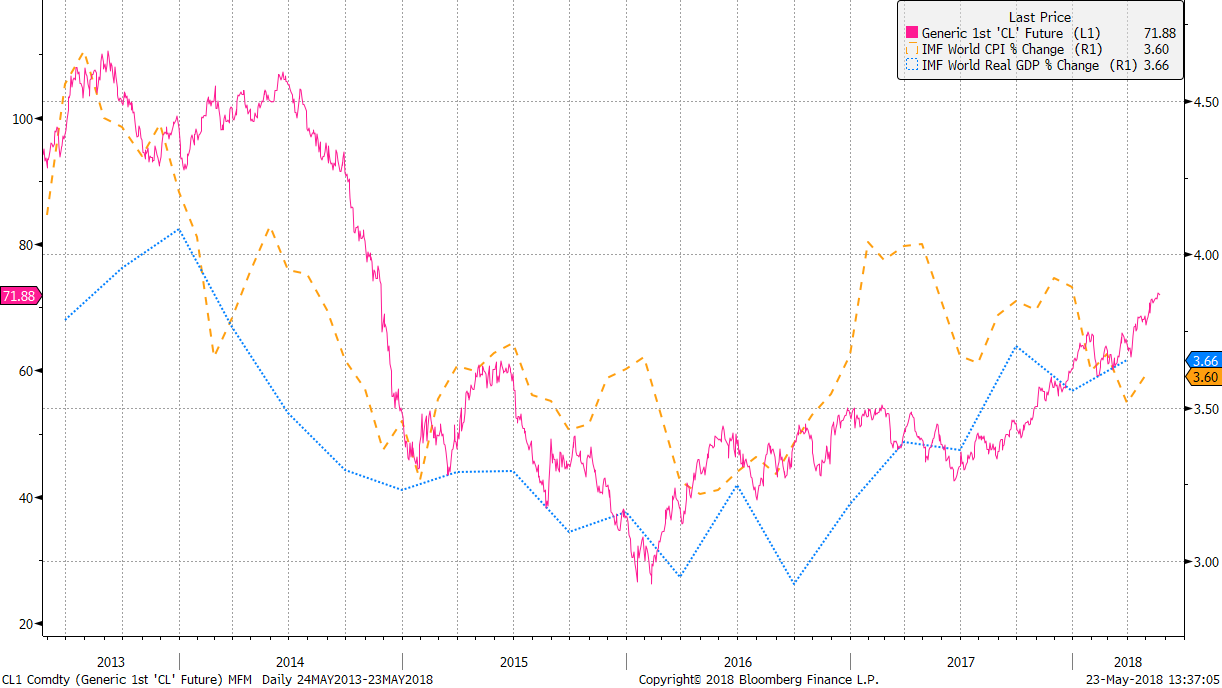 The price of oil is linked firmly to the economic cycle, so solid periods of global growth will drive up the price of a barrel. You can see from the chart that the oil sector has benefitted from stronger macroeconomic momentum since the dips of February 2016.

Another macro economic factor driving oil higher is inflation – which itself is linked to economic growth. As commodities can provide a good hedge against rising prices, a hike in interest rate expectations late last year also helped the oil price climb higher.

Aside from the big macro factors at play, a sharp swing in geopolitical risk, especially in the Middle East, has raised concerns that oil supply could be restricted as a result of sanctions, conflict or a political power grab.

Arguably the most important factor driving prices higher, however, is the coordinated efforts of OPEC and Russia to cut production in an attempt to drain the supply glut.

Strong demand during the programme meant the group of largest oil producing countries were able to use up nearly all of the oil inventories, improving the supply/demand equilibrium.

The International Energy Agency has also warned that OPEC-member Venezuela is likely to remain the largest risk in the global supply crisis, that could tip the market into deficit.

Venezuelan oil production is collapsing under the strain of its economic and political crisis. Despite having some of the best oil reserves in the world, Venezuela is having to import oil to meet its domestic demands.

The price of oil collapsed from above $110 in 2014 to under $30 a barrel in 2016, as producers binged on crude oil reserves, swamping the market with oil.

After some coercion, OPEC and Russia finally agreed to a production cut programme in late 2016, to help drain the supply glut. The plan slowly started to work, helping to lift the price of oil  – although it struggled to break above $60.

Barrels of the black stuff are now going for 25% more than they did in February, although Brent Crude has found resistance at $80. If this ceiling is broken, eyes will naturally look back to the $100 horizon and wonder if, or when, this is realistic.

For now, the macro environment seems to have peaked and global inflationary pressures stabilised. Geopolitical risk has always been unpredictable, but even more so in the current political climate. Still, we don’t expect the oil run to break $100 anytime soon.

Is this the start of a new commodities cycle?

It’s not just oil that boons when economic growth is in good health. Industrial Metals rallied more than 40% across 2016-17. Unfortunately, Industrial Metals are the poor relation in the commodities family in terms of media attention, and this performance went by rather unreported.

Although Industrial Metals were responsible for the delivering the bulk of performance in 2017, some of the momentum beneath its wings have been clipped for now.

If we look back over the last five years, it’s only the Industrial Metal subsector that’s in the black, as agriculture, livestock, energy and precious metals flash red. If we shorten the time horizon to three years, the picture doesn’t change enough for us to call the beginning of a new commodity cycle just yet. 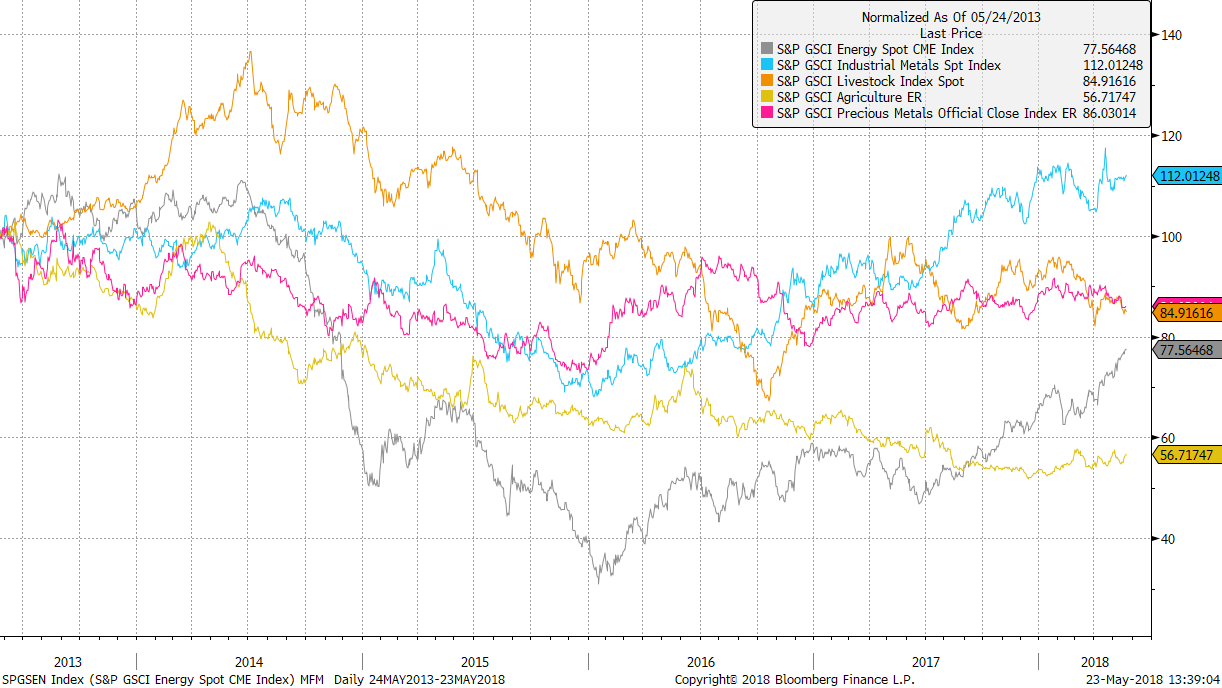 Oil’s rally has influenced the FTSE 100, which reached a new record as it climbed above 7,800 for the first time this week. The index has high exposure to Energy and Materials, so positive momentum in commodities is certainly good news for the index.

But Commodities are tangentially related to the FTSE 100’s recent rally, with the key driver being recent movements in sterling and easing tensions of a trade war between China and America. Over the month, sterling has depreciated by 7% against the dollar, which has fed through into the stellar performance of the FTSE 100.

A large chunk of the sales generated by the blue-chip index are made in dollars – nearly 30% in March 2018. These dollars need to be converted back to pounds to be reported. If sterling weakens against the dollar, the company gets more sterling for its dollars when earnings are being exchanged. This can be a helpful tailwind to profits and means the FTSE 100 offers a natural hedge against movements in sterling.

Whilst dollar-based earnings inflate the P&L sheet, the weaker pound makes many of the goods that are imported, including oil, more expensive.

As a net importer of oil, the UK is left quite exposed to movements in the currency, which will make it more expensive for consumers to fill up their tanks.

Looking at inflation measures of different oil products, we see that price rises have been quite harsh over the last couple of years, which could leave consumers less able to stomach any big rises in the price of oil at the petrol station. 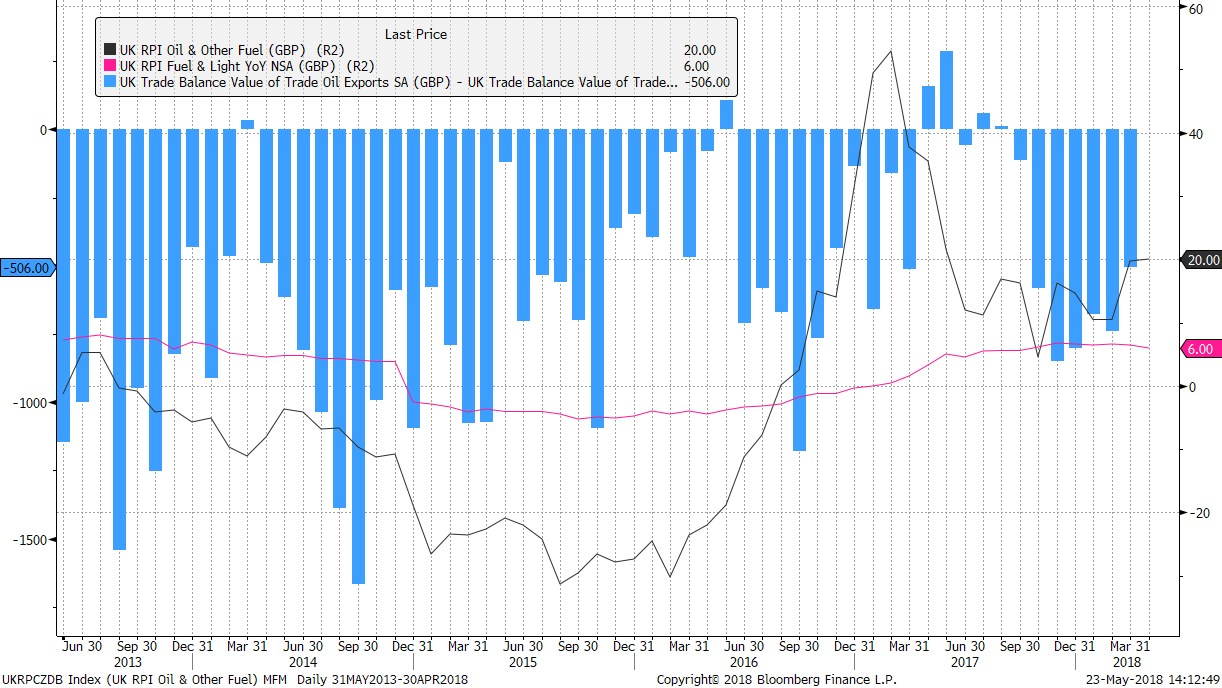 Impact on the Moneyfarm portfolios

We expect 2018 to be a strong year for commodities, but commodities are a notoriously risky sector, so we’ve decided to reflect this outlook in some of our higher-risk portfolios.

We’ve opted for a USD hedged general commodity exposure, to get a diverse access to the main commodity sub indices. As we’re investing in future contracts, the return will be influenced by fluctuations in the spot prices and also by the shape of the futures curve.