Following rounds of negotiations with his European counterparts, on 20th of February David Cameron announced that the EU referendum will be held on 23 June 2016. It came just the days after the EU Council meeting agreed the details of the “New Settlement for the United Kingdom within the European Union”.

What has been accomplished so far

In the recent round of negotiations, Cameron was able to achieve more than many expected. The deal removes any pressure on currency and banking union, giving the UK the reassurance it needed to protect the City of London against legislation designed for the euro area. The separate currency status of the non-euro countries is more prominently acknowledged. The settlement does not allow the UK to put any limits on immigration, but it permits the UK to put some limits on benefits (for example an exclusion during the first four years of in-work benefits for migrant workers).
The outcome of the negotiations may not be enough for the more extreme Eurosceptics. The arguments emerging on both sides of the campaign are compelling and it is likely that the outcome will not become clear until the result of the referendum is announced. JP Morgan suggest that the actual polls show an average 8% lead for ‘remain’ vs. ‘leave’, but to be confident in the results, there should be at least a 10% margin.

What is the market is telling us?

All the main brokerage firms are quantifying the probability of ‘Brexit’ in the June referendum at around 30%. The bookmaker odds continue to show a message consistent with the start of 2016, with the average leave (Europe) probability down to 31% from 35% at the beginning of January.

The risk of Brexit is reflected most in the recent performance of British currency. Sterling has on average depreciated 6% on a trade weighted basis since the start of the year. However, the reaction from the equity market is relatively benign. The main UK Equity Index, FTSE 100, has in fact been one of the best performers in global equity markets (- 1.5%) since the beginning of the year. 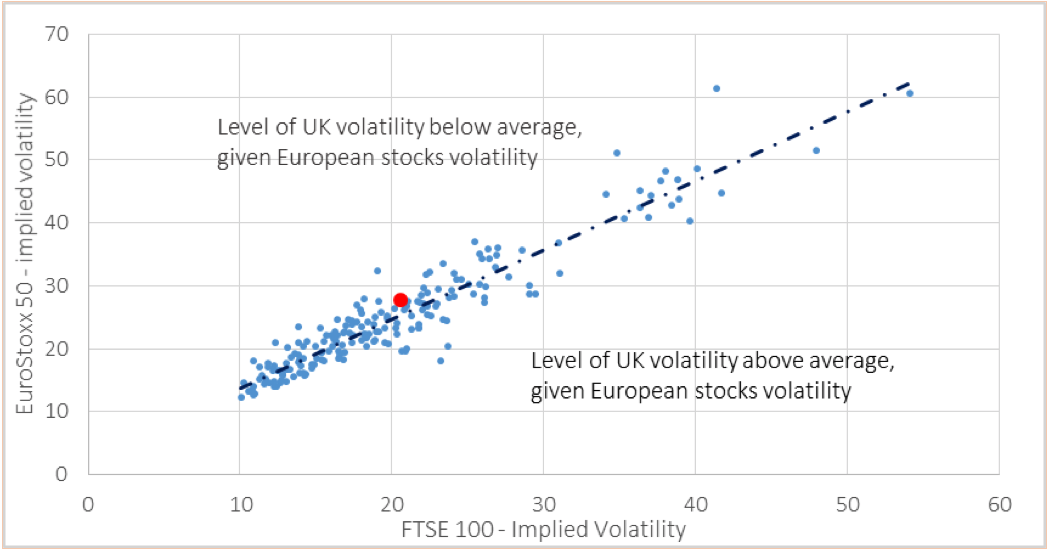 If we look at the difference between FTSE 100 and Eurostoxx50 implied volatility, there’s not a clear widening trend between the two. For the moment, the Brexit premium may be reasonably small in equity markets.

Sterling credit spreads (at an index level) have widened significantly relative to euro credit spreads. If we look at the difference in Asset Swap Spread (the difference between the yield of a bond and the LIBOR curve) and in Option Adjusted Spreads (the difference in yield between corporate and sovereign bond) for both Investment Grade and High Yield bonds, we can see clearly that that credit markets are pricing in more of a Brexit risk than equity markets. 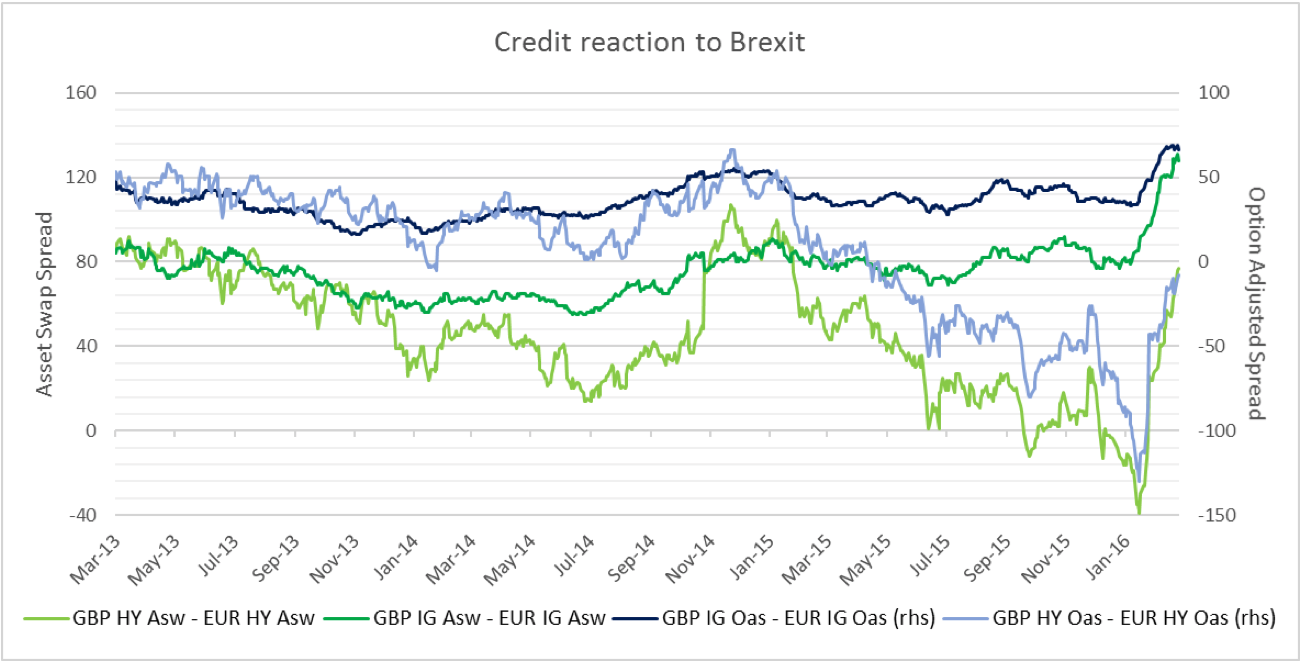 Sterling has been hit hard by the increasing likelihood of a Brexit scenario. But what we found extremely interesting, is the shape of the implied volatility of the GBPUSD exchange rate. The volatility increases as we extend the time horizon from 3, 4 and 5 months, and then decreases on one-year time horizon. 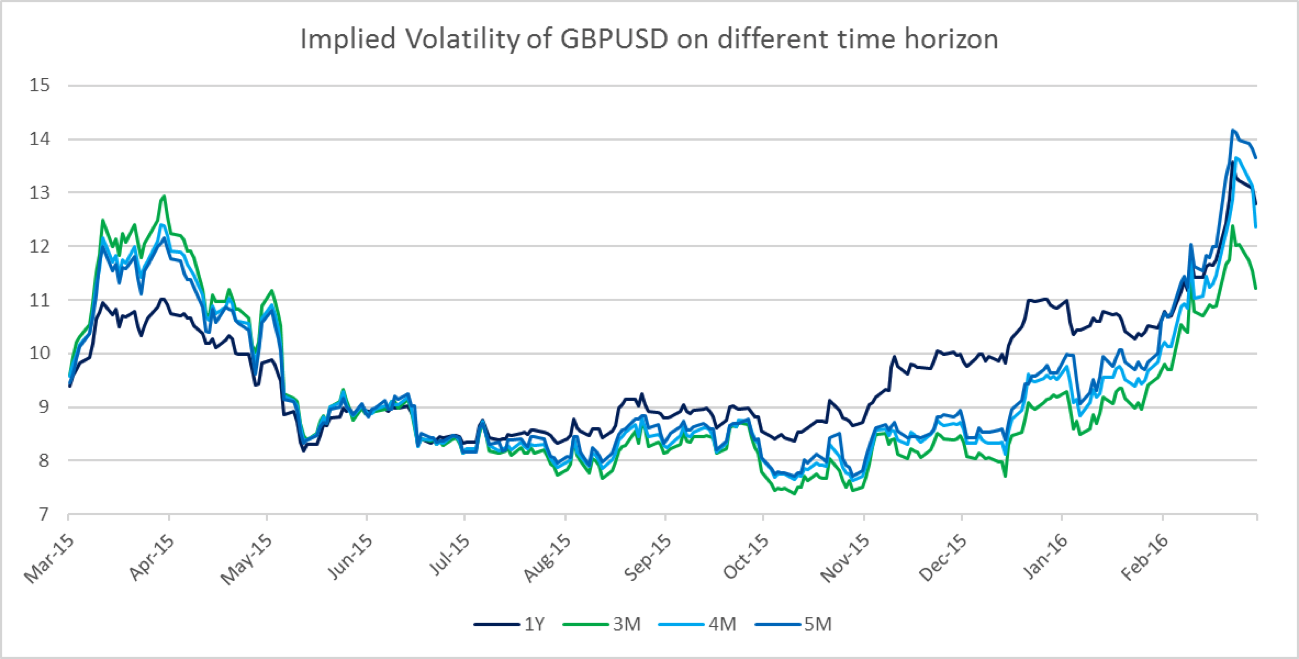 What the chart is showing us is that as we approach the EU referendum, the cost of hedging sterling currency risk would increase, and there’s much more uncertainty on the outcome for the pound in the short term (i.e.five months) than in the longer term (i.e. one year).

Up to now, sterling and credit are the hardest hit asset classes. On one hand, this could be caused by a market overreaction on the impact of potential Brexit, or that interest rate and equity are underestimating it. But what we can expect is a decrease in risk appetite for UK risky assets, primarily due to uncertainties related to the Pound’s moves.

Economic consequences of a “yes” outcome to June referendum are hard to predict. All the major brokerage firms estimate a yearly decrease of 1% in GDP growth over the next ten years for UK and of 0.3% for Eurozone.
In the short term Brexit would put pressure on the Bank of England and monetary policy, delaying the path of normalisation of interest rates, probably forcing Quantitative Easing or Negative Interest Rates. A “lower for longer” policy would be another reason for sterling to weaken.
There could be also a return to the debate on Scottish independence and consequences for the political stability of the UK. Moody’s has said the UK may avoid a credit rating downgrade if it leaves the EU. S&P, however, is less generous saying the UK would lose its AAA rating even if it becomes likely that Brexit is on the cards, blaming the impact of economic uncertainty.
From a trade perspective, the UK has got a huge trade deficit towards the EU. The Eurozone would have more to lose than Britain. This is only partially true, since the current deficit is financed by a financial surplus. So, Britain imports a lot of goods and materials from the EU, and exports services (finance, law, media, etc.); goods imports are regulated on a global basis, by World Trade Organisation. In the case of Brexit, Eurozone will continue to export to Great Britain, whilst UK firms will have trouble exporting services to Europe. Europe would remain by far the UKs largest trading partner and the UK will have to renegotiate all the commercial partnerships with the world that have been signed by European Union (since it will no longer be a part of it).

Is Brexit worth the risk?

It could be argued that the UK could implement the same models as Norway or Switzerland. It will not however help solve issues such as annual contribution to European Union and migration inflows to the country. It’s also unlikely to see friendly and constructive negotiations between the EU and the UK after Brexit, in order to restore a decent situation. Admittedly the long term consequences of Brexit will be hard to predict, but the risks currently seem to outweigh the benefits, for both the UK and the rest of EU.