July was a very positive month for investors, despite inflationary fears and the risk of recession in both the United States and Europe. In fact, both the bond and equity sectors ended the month sharply up. Commodities, meanwhile, struggled in the first part of the month, only to recover after the Russian decision to cut the supply of natural gas to Europe.

The question is whether this is a technical rally, or a momentary rise after six months of largely falling markets. As usual, the answer is complicated and it’s unclear whether markets are too optimistic about inflation expectations and the expansionary reaction of Central Banks in the event of a recession.

The chart shows equity performance in the US, Europe and the UK since the end of May. After a sharp sell-off in mid-June, equities, particularly in the US, have regained most of what they lost. It’s another reminder of the challenges of short-term trading. 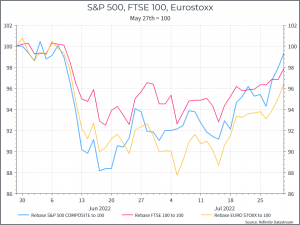 But is the apparent optimism of recent weeks justified or misplaced? History suggests that a difficult market environment can still be punctuated by quite sharp rallies. At the same time, there are reasons to be more constructive over the long term.

On the constructive side, we can point to equity valuations. The two charts below show forward Price/Earnings for the Developed World Ex-US and for US equities. In both cases, we can see a sharp de-rating over the past few months. All else equal, that should represent a better entry point for investors. 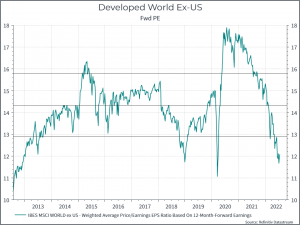 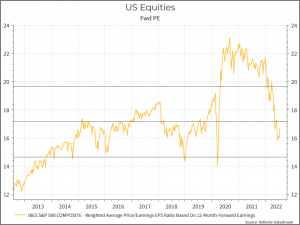 In terms of earnings, we have seen some downgrades of earnings estimates, but so far they’ve been fairly muted. That might just be a question of time – and corporate profitability is still at risk – or maybe corporates are proving able to manage their way through slowing growth and high inflation.

Money markets are pricing in a high probability of economic crisis in 2023, with expectations of rate hikes now significantly lower than those implied by the Fed’s forward guidance. In other words Central Banks, the Fed in particular, could be forced to u-turn on the rate hike next year, in order to support struggling economies. On the other hand, however, central bankers continue to reiterate that the primary focus is inflation.

To complicate matters even more, the major indices of consumer sentiment have continued to be adjusted downwards. This has affected the positioning of large institutional investors. Overall, the situation remains uncertain. In our opinion, if inflation doesn’t start following a clear downward path in the coming months, it seems unlikely that central banks will cut rates, even if the drums of recession bang loudly.

Conveniently, US CPI for July, showed a lower-than-expected increase. Year-on-year inflation came in at 8.5%, still miles away from the Feds 2% target, but better than the expected 8.7% figure that analysts had been looking for. After months of higher than expected inflation prints, this constitutes a relief.  How long that relief lasts is less clear. Barring further shocks, you’d expect US inflation to slow from here, but that’s already a consensus view, even if the precise trajectory is up for debate.

Digging into the details, we can see that lower gasoline prices helped bring down inflation, at least relative to last month. As the chart below shows, gasoline prices are well off their recent highs, but still some way above the level of a year-ago, thanks in large part to Russia’s invasion of Ukraine. 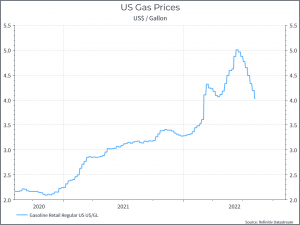 What happens now? First, there’s probably some relief in financial markets – the dollar should weaken a bit. Second, attention will likely turn again to the US Fed. Prior to this release, financial markets were leaning towards another 75 bps hike in September, and various Fed statements seemed to support that view. Could this result prompt a re-evaluation? The immediate answer has been yes. Financial markets went from a 70% probability of a 75 bps hike before the release to around 38% afterwards. Nonetheless, you’d guess that Fed governors might need more evidence than a single better-than-expected data point in the context of such high levels of inflation. If we do see inflation begin to trend lower, then attention will focus again on the labour market – which still appears very robust. That’s also likely to weigh on the Feds thinking.

Finally, the geopolitical situation continues to weigh heavy on markets, with the Russian government deciding to cut European natural gas exports by 20% and the visit to Taiwan by Nancy Pelosi risking the triggering of major tensions in South-East Asia.

It’s still difficult to ascertain whether or not the July rally marks the beginning of new market conditions, or whether it was just a technical recovery. On the one hand, the reasons for adding duration and risky assets are growing. At the same time, we believe it is not yet time to change our positioning and we expect inflation and earnings expectations to give more robust signs of a downward adjustment.

On the Emerging Markets side, we have instead raised the alarm level given the situation in Taiwan, and we’re ready to cut our exposure if the situation worsens.