Like 2020, 2021 has been a year dominated by Covid-19. From the variants to the vaccinations, the attention of the world has (rightly) been on controlling and mitigating the spread of a virus that is once again threatening to cause significant disruption.

2021 was meant to mark the beginning of a new economic and financial cycle and, to an extent, it delivered on that promise. Vaccination campaigns meant that economies were able to, largely, reopen smoothly. However, there were a number of news stories this year that were unrelated (or tangentially related) to Covid. Here’s a list of the stories you may have missed:

The Suez Canal gets blocked

If you cast your mind back to March, you’ll remember when a container ship the length of four football pitches brought one of the world’s busiest trade corridors to a standstill. The Ever Given was wedged in the Canal for the best part of five days, bringing hundreds of ships to a halt as they awaited clearance.

About 12% of the world’s trade passes through the Suez, so the knock-on costs of the blockage were astronomical. Data from Lloyd’s List found that every day the ship remained blocked in the passageway, some $9.6 billion of trade was held up. The blockage affected all manner of business but oil prices skyrocketed.

Of course, social media was abuzz for the entirety of the blockage with many enjoying the sheer scale of the problem and the apparent randomness of the event. The ship getting stuck has, on a material level, nothing to do with Covid-19. As they say, it never rains but it pours.

The UK runs out of lorry drivers

This next one is perhaps the most ‘Covid-adjacent’ story on this list, but a number of factors combined to make it the big news that it was. Around the start of Q4, it became apparent that the UK was facing a shortage of lorry drivers.

Just how serious this shortage came to light when shelves in supermarkets ran empty, petrol stations ran out of fuel and the government began taking steps to address the problem. A Road Haulage Association survey found that there was a shortage of around 100,000 qualified lorry drivers in the UK, a number which includes EU workers that drove in the country.

Naturally, this story has a lot to do with Brexit. Covid was certainly part of the problem, but the whole saga was exacerbated by the new immigration rules put in place as part of the withdrawal from the EU. Layers of bureaucracy and a decline in the value of the pound made working in the UK significantly less appealing to EU nationals. This is an ongoing problem for the government to solve, with the UK’s food security on the line.

Heading all the way back to January, you might remember the rise and fall of the GameStop meme stock. Ultimately, users of the Reddit thread r/wallstreetbets were able to organise a short squeeze of the stock of US game retailer GameStop. Users inflated the price of the stock from its early-month valuation of $17.25 to a whopping $500 per share.

The repercussions were far-reaching. App-based brokerage service Robinhood was forced to halt trading on the stock, while there were major consequences for some hedge funds and huge losses for various short sellers. Accusations of market manipulations were rife, but the saga served to highlight the fragility of certain short sells in the face of online organisation. 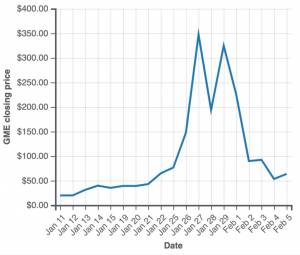 If you want an update on how the stock is doing now, it’s down to about $148 per share. This is still way up from its valuation at the beginning of the year, but the peaks are becoming a distant memory. For investors, the story was and should be instructive. There’s money to be made speculating, but there’s also an awful lot of money to be lost if you get it wrong.

The year of the NFT?

If you’re clued up on the development of blockchain technology, you can skip to the second paragraph of this section. For anyone who doesn’t know what an NFT is, however, it stands for Non-Fungible Token. More specifically, it’s a type of asset created with blockchain technology to prove the ownership of digital assets. You can read more about them here.

In 2021, the concept of NFTs gained some traction. Despite even the most technologically savvy people being vague on the details, we saw the acronym become more of a household name and we also saw some major sales. In March, a piece of digital art by Beeple sold for $69 million at Christie’s. This, according to the auction house, put him “among the top three most valuable living artists.”

What this means from an investment perspective is unclear. We wrote a piece earlier in the year weighing up whether or not NFTs represent a viable investment opportunity (spoiler: they don’t). It seems likely that, for now at least, they’ll remain collector’s items. In any case, 2021 was a big step forward for the technology, if only in terms of notoriety.

It was one small step for man, and one giant leap for… well, a few men. 2021 was the year the wealthiest among us left orbit to look down on earth from a more amenable height. More specifically, both Virgin’s Richard Branston and Amazon’s Jeff Bezos took trips to space as the first steps in an emerging commercial space race.

‘Blue Origin’, Bezos’ space program, took flight in July, just a week or so after Branston’s Virgin Galactic tested the limits of man’s capabilities. Ultimately, the two companies are selling a similar dream – namely, a few minutes of weightlessness and the experience of sitting outside the earth’s atmosphere.

If you’d like your eyes to water, then the price for a trip on Virgin Galactic was initially set at $200,000, before being hiked to $450,000 in August. Blue Origin, on the other hand, is yet to reveal what the cost of a journey will be, focusing initially on private sales and auctions – the first of which was won by Oliver Daemen, for the bargain bucket price of $28 million.

Arguably the year’s most important political and environmental event was the COP26 summit in Glasgow. The first couple of weeks of November saw world leaders come together in Scotland’s largest city to discuss the combined efforts to combat climate change.

The full list of agreements is extensive. The key takeaways, however, were an agreement to meet (again) to discuss how emissions could be cut, an explicit plan to cut down on coal usage, as well as plans to give assistance to developing countries to cope with the effects of climate change and switch to clean energy themselves.

There have been criticisms of the event, primarily that it did not go far enough. Keeping global warming “well below” 2C is the plan, but many have argued that current plans will fall far short of that goal. From an investor’s perspective, the summit is a start. It has, rightly, improved awareness of climate issues and the necessity for a global effort to combat them. It may lead to an increased focus on Socially Responsible Investing, something Moneyfarm began offering earlier this year too.