What are we talking about? We think our portfolio positioning today is relatively conservative, at least compared to some of the internal benchmarks we track, in terms of lower equity exposure. As a result, we spend a good amount of time thinking how we might be wrong and what a more optimistic case for equities would look like.

The current view: Just to briefly review the case for conservative positioning. It basically argues that geopolitical uncertainty, high starting inflation and monetary tightening will translate into slower growth, lower earnings and higher discount rates. And, perhaps most importantly, that macro scenario is not yet fully reflected into equity prices.
What about a more optimistic perspective? We sometimes think about asset prices as being the probability-weighted result of a series of possible scenarios. That sounds fine except that we don’t know precisely what the scenarios are, nor do we know the probabilities – so its practical application is a bit limited! In any event, a more optimistic scenario might go like this.
First, the macro environment (aside from inflation) isn’t currently that bad. The chart below illustrates the point. These are economic surprise indicators, basically taking aggregate macro data and comparing them to analyst expectations. Negative numbers mean the data is coming in worse than expected and vice versa. So, in early 2020 we saw lots of weaker-than-expected data as the global economy shut down – while from 2021 onwards, we saw better-than-expected data, as the global economy began to recover. Today, we can see that macro data is still coming in a bit better than expected. The most recent European PMI data, for instance, tells a similar story. So far, the global uncertainty hasn’t been as bad as analysts might have expected, even if they’ve been downgrading their growth forecasts. 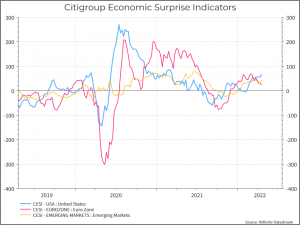 Second, earnings estimates are holding up ok. The chart below looks at earnings revisions in US, UK, Europe and Emerging Markets. For context, the jump in late January is when the time series moves from 2021 to 2022. What we see is that, so far, earnings expectations in most Developed markets have held up fine, while Emerging Markets have seen some downgrades. Data from the current US earnings season (1Q22) paints a similar picture. With only around 20% of companies having reported so far, we see that about 79% have beaten expectations (according to Refinitiv) – that’s marginally ahead of the 5-year average. It’s early days, admittedly, but the current reporting season in the US suggests corporates are holding up fairly well, at least so far. 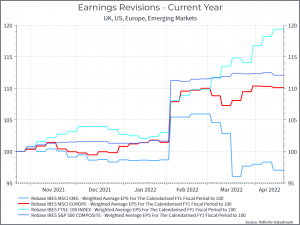 Third, valuations. The chart below shows the forward P/E for Developed Markets Ex-US. It shows the sharp de-rating from the highs of 2020 (when markets moved quickly to price in an earnings recovery) and now sits a bit below the 10-year average. In contrast, valuations in the US remain above their long-term averages, but they have also de-rated, albeit less dramatically. But, if earnings do prove resilient, we can argue that valuations, particularly outside the US, look supportive. 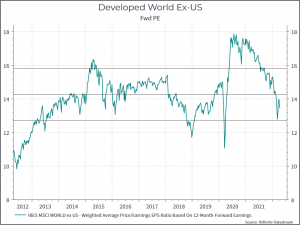 Where does this get us? We can make a case that the macro data, earnings data and, at least in some parts of the world, equity valuations are all supportive – at least relative to current expectations. The challenge, we think, is how this data will evolve. We’ve yet to see the full impact from the war in Ukraine and tighter monetary policy on economic growth and on earnings. The chart below shows the number of rate hikes in the US priced in by fixed income markets. 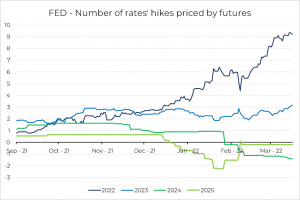 You could argue that equity analysts haven’t really reflected the impact of higher rates on their earnings forecasts so far. We’re not convinced that earnings will be quite as resilient as the consensus appears to believe, but that’s an assumption we continue to debate.