What are we talking about? There’s a lot of discussion among financial analysts about inflation. Quite often the question is – will it be transitory, as Central Banks have generally argued, or rather more sticky? The answer can have important implications for the price of financial assets.

Does it Matter? We’d argue that what really matters is what Central Bankers think about inflation, rather than financial analysts. Maybe that’s always true, but we think it’s particularly true now.

Let’s take a step back. Central bankers in Developed Markets typically want inflation of around 2% per year and they use various tools (notably policy interest rates) to try to achieve that.

Currently inflation is running well above that in places like the US and the UK (as the chart below shows) – partly due to supply-chain shocks, partly because of pent-up demand for specific products, or partly due to government policy (depending on your perspective). Ordinarily that would prompt Central Bankers to tighten monetary policy. So far they’ve largely resisted doing so and they’ve argued that the current higher-than-normal levels of inflation are “transitory”. That’s a bit tricky, as sceptics have noted, because no Central Bank has really defined what transitory means, even if the direction they’re looking (back towards 2% inflation) is fairly clear. 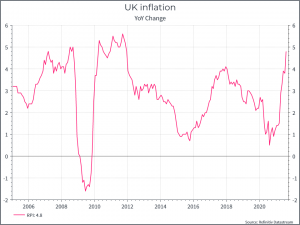 The Central Bank playbook usually says that if inflation jumps because of a shock to supply (eg a large container ship blocking the Suez Canal), Central Bankers shouldn’t act – it’s not something that monetary policy can affect. The caveat (there’s usually a caveat) is that, if the supply shock starts to embed itself into inflation expectations then Central Bankers should react. This thinking was well-articulated by the Governor of the Bank of England at a speech last week to the Society of Professional Economists (entitled “The Hard Yards”). That speech raised some questions about whether the Governor is losing some patience with the idea of “transient inflation” – even as he acknowledged the impact of supply shocks – and even raised the spectre of stagflation.

Why might inflation be sticky? One reason is the labour market. We’ve touched on this before, but it’s worth repeating. Demand for labour is quite high, and employers are frequently struggling to find qualified candidates (any spare HGV drivers around the place?). That has prompted wages to rise, and higher wage growth is precisely the sort of thing that can get embedded into inflation expectations, and prompt Central Banks to act. Another might be commodities – investment spending has dropped off but, as a number of analysts have noted, the green transition, if it occurs, i) won’t eliminate the need for fossil fuels overnight and ii) might demand increased quantities of certain commodities (eg copper).

Where do we come out on this? For now at least, we continue to believe Central Bankers, in that we think inflation will prove “transitory”. Or perhaps more precisely, we think that Central Bankers will continue to argue that inflation is transitory, even as they take steps towards ensuring that that’s the case. And, maybe most importantly, that the steps that they do take won’t be so dramatic as to put the global economic recovery at risk.

On the margin, that probably means that we’ll see the removal of stimulus – very carefully – maybe a bit sooner than we might have expected a couple of months ago. That view has already been reflected in, for instance, slightly higher UK interest rate expectations (according to Bloomberg data, the implied policy curve two years from now is about 30 bps higher than it was a month ago). And we’d guess that Central Bankers would be very happy to see normalisation in supply chains (both for goods and for labour – rather like the end of furlough). But, like all forecasts, these assumptions need to be watched and re-evaluated in the face of new information.