What are we talking about? The Fed and the Bank of England both raised rates this week, as expected. Both are wrestling with high inflation and economic uncertainty – but the tone of their releases was slightly different – with the Fed adopting a more hawkish tone than the Bank of England.

Where have we come from? First, a quick reminder on inflation. The chart below shows annual inflation for the UK and the US over the past twenty years. The target for both Central Banks is around 2%. It’s a significant cost-of-living hit to households. 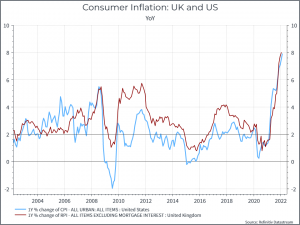 The chart below shows how much expectations for US rates have changed. As late as September 2021, financial markets basically expected no change to the Fed funds rate in 2022. Today, markets are pricing in seven hikes. 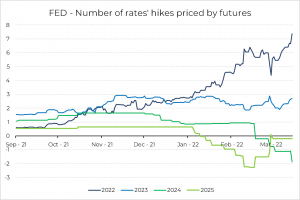 Those expectations reflected comments from Fed Chair Powell. He repeatedly stressed that the US economy was performing well and the labour market, in particular, was very strong, despite the macro uncertainty from Ukraine. The chart below illustrates the point. It shows total job openings in the US and an employer survey of whether businesses were struggling to fill positions. Both are at ten-year highs. 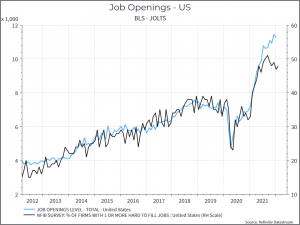 There was little to suggest that geopolitics might derail the Feds tightening plans.

The Bank of England struck a slightly different tone. First, at the headline level, there was one dissenter, who favoured keeping rates unchanged (in the US, the sole dissenter favoured raising rates by 0.5% rather than 0.25%). Second, the tone of the Banks report was a bit more cautious – acknowledging robust demand early in the year, but raising concerns that inflation would damage consumer spending in the coming months – even before the impact of the Ukraine conflict on consumer and business confidence. Nonetheless, the consensus view on interest rate hikes (shown here) shows a similar picture – an increase in the number of rate hikes expected for 2022, although not as sharp as in the US. 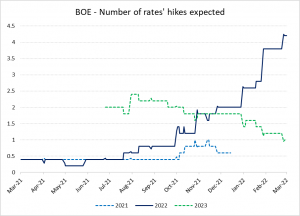 In terms of equities, we’d argue that starting valuations today look better than in the recent past, but the risk to earnings is probably greater – as we’ve noted before. We think that argues for cautious positioning, as reflected in our recent rebalance, but we’re wary of being too conservative.

These rate increases are a reminder that geopolitics isn’t the only risk facing markets. Upside risks to inflation and downside risks to growth are a difficult combination – and it raises the risk of a policy mistake – such as tightening too aggressively. It’s something that markets appear focused on. The chart below shows the spread of US 10-year bond yields compared to 2-year bond yields. Some argue that a lower spread (ie a flatter curve) is a sign that the economy will slow and represents concerns that the Fed will tighten too aggressively. 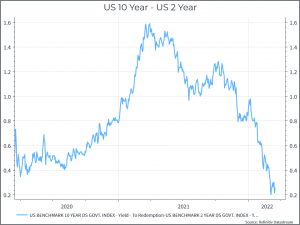 In terms of equities, we’d argue that starting valuations today look better than in the recent past, but the risk to earnings is greater – as we’ve noted before. We think that argues for cautious positioning, as reflected in our recent rebalance, but we’re wary of being too conservative.