What are we talking about? Last week saw a flurry of Central bank activity. First, the US Federal Reserve hiked rates by 75 bps for the first time since 1994. Then the Bank of England raised rates by 25 bps, and indicated that UK inflation could exceed 11% year-on-year in the fourth quarter.

What does it all mean? It feels like there’s not that much to say. Central banks are set on tightening policy to bring down inflation. The chart below shows expected policy rates for UK, US and EU in December 2022. Expectations have risen sharply over the past six months. 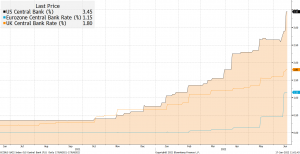 You wouldn’t usually put too much emphasis on a single data point, but the latest US inflation number seemed significant. Had that number been below expectations, rather than above – the Fed might only have moved by 50 bps and, maybe, the narrative would have been much more optimistic (“we’ve seen the peak, trajectory is improving, soft landing is more likely etc”), rather than the 75 bps hike and the downbeat narrative we got instead.

In the UK, the challenges seem possibly greater. The Bank of England raised rates by 25 bps, with 3 out of 9 voting for a 50 bps hike. The stagflationary narrative was pretty clear – forecasts for a decline in GDP in 2Q and 11% annual inflation in 4Q.

You could reasonably ask why the Bank of England didn’t do more, and the stagflationary challenge is part of the answer. Another possible answer relates to the UK mortgage market. The UK market has much more of a focus on, say, 2 year and 5 year fixed rate mortgages than in the US – where the 30-year fixed rate mortgage is far more common. It seems that maybe upto 40% of UK mortgages are on relatively short fixed-terms, and a sharp repricing here would be another hit to a significant cohort of UK households. A couple of charts illustrate the point:

The first chart shows rates on US 30-year mortgages compared to sales of single family homes. We can already see the impact of higher rates on sales volumes over the past couple of months. 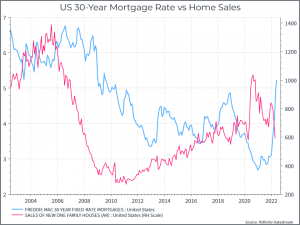 The second chart shows rates on UK 2-year and 5-year fixed. There’s not much to choose between the two today, but on these numbers the rates have doubled over the past 9 months – representing another hit to UK homeowners. 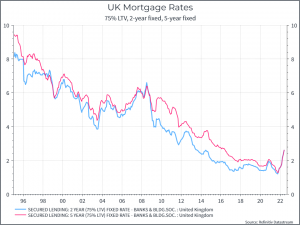 Where does this get us? More signs that it’s a challenging and uncertain environment. With inflation still not abating, central banks appear to have little choice but to raise rates, even as economies begin to slow – and that makes the engineering a soft landing even harder.