What are we talking about? Financial markets commentators (and the market) expected the Bank of England to hike rates last week. It didn’t, despite a series of hawkish statements, notably from the Governor, in the weeks preceding the meeting. Cue a mild bout of financial market pandemonium – or at least a lot of harrumphing from various commentators concerned about the Bank of Englands credibility.

A few bits of context: First, financial market participants (and central bankers) generally think it’s a good thing when Central banks do what they say they’re going to do. They aren’t usually very explicit, but markets are often quite good at pricing in Central Banks future decisions, based on comments from central bankers (and their interpretation by former central bankers now at private financial institutions). By the way, this wasn’t always the case. Some decades ago, some central bankers believed that the best way to get maximum impact from their decisions was to surprise the market. Mercifully those ideas are no longer in vogue.

Third, not everyone was convinced that a hike in rates would have been the correct decision – some commentators viewed it as a potential policy mistake. And, as we’ve noted before, the downward slope to the long end of the UK yield curve (see chart below) might indicate that financial markets also viewed a rate hike as premature, despite high levels of inflation. 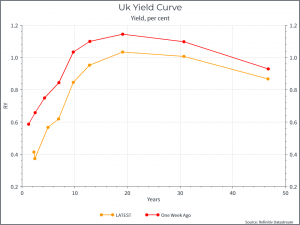 What was the impact? Whatever the implied probabilities were, the decision did come as a surprise to much of the markets. The chart below shows the sterling / dollar exchange rate, with sterling depreciating quite sharply after the announcement. 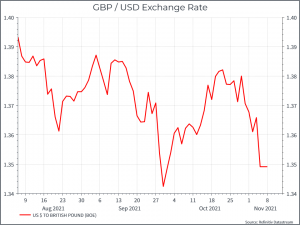 In a similar vein, the UK 10-year yield dropped from its level pre-announcement, although it’s now only back to where it was in late September. 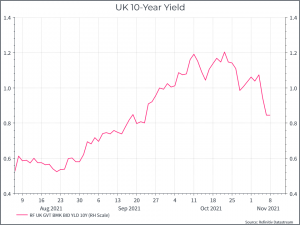 In terms of future expectations, according to Refinitiv, the market is implying only a 44% chance of a rate hike in December, but an 80% chance of a hike by February. That somehow seems consistent with the Governors message – a clear direction of travel, even if the precise timing is up for debate.

What about credibility? Some commentators noted that the Bank of England risked its credibility by not hiking given previous comments and the market interpretation. Credibility is quite interesting. Most of us think it’s valuable for people to believe what we say. In terms of monetary policy, you might expect that a more credible central bank will be able to reduce inflation more effectively, and at a lower social cost. Unfortunately, as noted by academic and former Fed governor Alan Blinder, there’s apparently not much evidence to support this theory – even if you think there should be.

Nonetheless, central bankers do value their credibility for various good reasons. The most important reasons usually come during a crisis. In 2012, with the Euro at risk, ECB president Draghi uttered three words – “whatever it takes”, and that (more or less) was enough to calm markets. Similarly, in 2020, with fixed income markets barely functioning, the US Federal Reserve announced a number of programmes to support the market. The Fed ended up needing to spend relatively little of what was announced; the announcement itself was sufficient.

Where does all this get us? The decision by the Bank of England came as a surprise, and we saw falling bond yields and weakness in sterling as a result. But perhaps it wasn’t as big a surprise as all that – inflation is high, but some of that is a function of supply. The labour market, and the recovery, in the UK remain uncertain. Perhaps the governor will look back and think he was a bit too forthright in his hints about future rate increases. But, we continue to think that in six months time UK rates will be slightly higher than they are today. And from that perspective, the world hasn’t changed very much.