What are we talking about? US inflation for July is due to be released on Wednesday. It’s likely to get a fair amount of attention, as investors look for signs that inflation might have peaked. But looking back at the past couple of months, it’s notable that the same scenario on inflation produced quite different market outcomes. Forecasting the future is tough enough (impossible) at the best of times, but actually it’s doubly difficult. There are usually two parts to any financial forecast – what will the result be and how will financial markets react to that result. And the last two US inflation releases illustrate the point.

What about some details: Both the inflation reports for May and June showed inflation coming in above analyst expectations. Inflation for May (released on June 10th) came in at 8.6% year-on-year, compared to a Bloomberg consensus estimate of 8.3%. Inflation for June (released on July 13th) came in at 9.1% yoy, compared to a consensus forecast of 8.8%.

The chart below shows the market reaction to the inflation releases. The dark line represents the US 10 year yield, the lighter line is the US 2 year yield. In June, we saw yields on both bonds rise in immediate response to the stronger-than-expected inflation print. In July, we saw a more muted reaction from the 2-year bond while the 10-year yield fell. 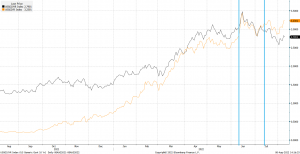 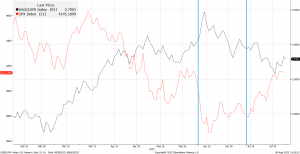 What can we say about all this? There are a couple of points worth making. First, as we said before, forecasting accurately is hard. Doing it correctly twice every time (ie once for the variable and once for the market reaction) is even harder. Second, you can come up with some plausible explanations, but you can’t really know which one is correct. Maybe it’s positioning. Investors were expecting a disappointing inflation print in July and it was “all priced in” – investor sentiment was generally regarded as very bearish in July. Maybe it’s about the Fed – in June, markets weren’t convinced about the Central Banks commitment to tackle inflation – by July, they had regained their faith. Short-term pain could turn into long-term gain. That could explain why the spike in yields after the CPI release in June didn’t last very long. Or maybe, investors have gotten it wrong – and the rally in equities in July is unjustified.

What about this weeks CPI release? We don’t really take short-term positions, or bet on the outcome of single data points. That said, we think that inflation in the US will peak shortly. But if it’s this release, the next one or the one after – we’re not trying to make that call.

If inflation comes in higher than expected, we’d guess that it’ll raise the probability of a 75 basis point hike in September. Fed members appear to be hinting in that direction and the market is already implying a greater than 50% probability. That will raise the probability of a recession in the US – at least in our view – and that seems to be a price that the Central bank is prepared to pay. We think that might also cause the spread between 10 year government bond yields and 2 year government bond yields in the US to invert still further.

A better than expected print would probably help sustain the equity rally we’ve seen over the past few weeks, even if we don’t think that earnings expectations fully reflect the likely slowdown in economic activity. But, as we saw in June and July, making such precise calls is a fraught business.