What are we talking about? Tensions are rising between Russia and the United States over Ukraine. The US believes that Russia may be considering action in Ukraine over the next few months, and has been trying to persuade European allies of the danger. That might present a risk for financial markets.

A quick look back: We’ve been down a similar road before. Russia annexed Crimea back in 2014. We had a quick look at the market reaction around that time. The chart below shows moves in the equity market – the oval indicates the period of the immediate crisis (February to March 2014). We see Russian equities drop, while UK, European and US equities don’t show a significant response. 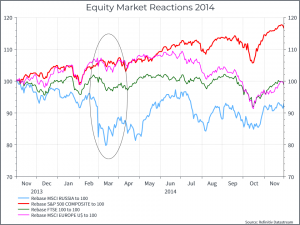 Looking at the exchange rate, we can see a bit of rouble weakness during the crisis (February – March 2014), but the real impact on the currency came as the oil price fell towards the end of the year. In a similar vein, oil reacted marginally during the crisis, but not much more than that. 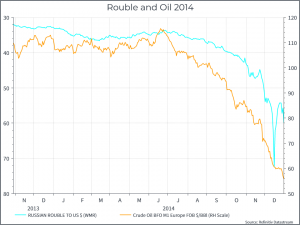 Finally, looking at the US 10-year yield, as a potential beneficiary of any risk-off sentiment during the crisis, we see very little reaction. Overall, outside of the Russian equities and some rouble weakness, the overall impact on financial markets appears to have been quite muted. 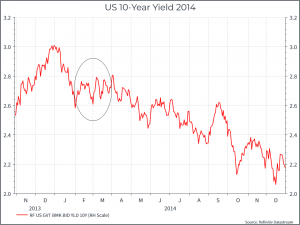 So, nothing to worry about then? In recent years, we’d argue that geopolitical risks haven’t really weighed too heavily on global financial markets. Equity markets have generally risen despite a laundry list of potential concerns, or at least labels – “Russia”, “Syria”, “Iran / Middle East”, “China / Taiwan”, “New Cold War”, “North Korea” etc etc. None of those issues is “solved” – whatever that means, but financial markets appear to believe that a very negative scenario is unlikely, or perhaps that lots of financial liquidity trumps all other considerations.

Of course, the lessons of 2014 may not be directly applicable. You could argue that the US has taken a more active position earlier than it did in 2014, already threatening sanctions against Russia and perhaps raising the stakes. You could also look at natural gas prices in Europe and wonder if it’s related. Significantly higher European gas prices could have broader economic consequences.

Where does that get us? Recent history suggests that global financial markets probably won’t get too concerned about what happens in Ukraine, even if it raises tensions still further between the US and Russia. The probability of a more negative outcome isn’t zero but it’s not our base case at the moment.