What are we talking about? US Inflation for December hit 7% year-on-year – the highest reading in nearly 40 years. In response, the 10-year yield has fallen and US equity futures have rallied. That might not have been the obvious reaction. 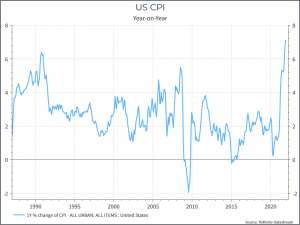 Some context: Inflation has been higher-than-expected for longer than many, including Central Bankers, might have hoped. And recently that’s prompted a response from Central Bankers: the Bank of England raised rates and the US Federal Reserve is now expected to hike rates as early as March. That has pushed the US 10-year yield higher over the past couple of weeks – still at a low level, but a fairly sharp move nonetheless and one that has helped put some pressure on highly rated growth stocks in the US in recent weeks. 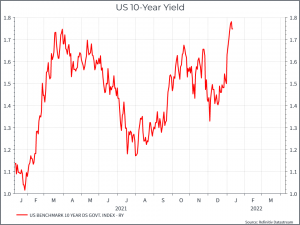 In equities, rising yields have helped value stocks to outperform their faster growing peers (or so we’d argue). The chart below shows the relative performance of US value vs US growth stocks, compared to moves in the 10-year yield. 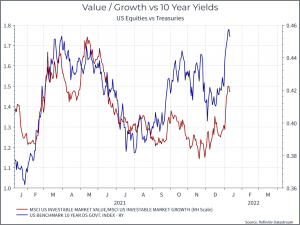 And the chart below shows the long-term trend – the 15-year outperformance of US growth stocks ties up fairly neatly with the long-term decline in nominal 10-year yields. 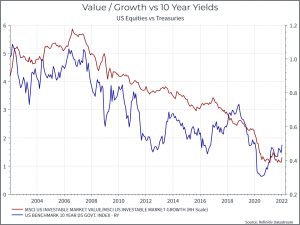 How should we think about todays inflation reading? We think there are a couple of moving parts to consider. First, are we at peak inflation? Will inflation move lower from here, as economies continue to re-open, supply chains improve etc? Second, now that Central Banks have started to move, how aggressively will they move? If the Fed raises rates four times this year (by 100 bps), will that slow down the US economy quite sharply?

One interpretation is that we are close to peak inflation in the US – partly for base effects and partly because the Fed will start to withdraw stimulus perhaps a bit quicker than might have been expected a few months ago. In that case, todays inflation reading was high, but not higher than expected, and that could be enough to signal an end to the inflation surprises we’ve had in recent months. In that scenario, the Fed might not hike rates as often as some expect this year, and that might give some support for growth stocks, compared to their more lowly-rated peers.

It’s always tricky to conclude too much from a single datapoint, but if that thesis is correct, we think it’s broadly positive for equities going forward. As always, we’ll continue to monitor data going forward – particularly on the labour market, which will probably have an important role to play.