What are we talking about? Earlier in the week, the UK Statistical Agency (ONS) released some wage data for the UK. The newspaper headlines focused on the sharp decline in real wages, ie after adjusting for inflation, and that’s particularly relevant given the latest inflation data. As the chart below shows, by some measures, real wages are shrinking at their fastest pace in twenty years, as annual inflation hit double-digits. But the blue line shows that nominal wage growth continues to accelerate and actually came in ahead of economists expectations in the latest release. How should we think about this? 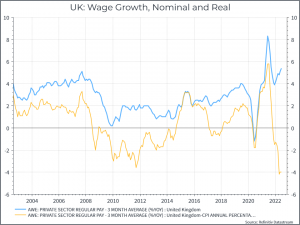 It depends: Unhelpfully, it depends, at least a bit. The focus on real wage declines is certainly justified. It suggests that many households will struggle to maintain their current standard of living as their income grows at a slower pace than their costs. But what if you were a Central Banker? For most central bankers, the most important number in life is 2% – their usual inflation target. And with annual inflation running at 10%, they’re clearly not happy. But they’re also not that happy about wage growth of 5% either because, in the end, 5% wage growth probably isn’t consistent with a 2% inflation target (unless you think your labour force is becoming much more productive). One thing that central bankers really fear is the “wage-price spiral” – the idea that if wages go up, companies will just raise their prices to reflect that so workers will demand more wage increases etc – and higher inflation becomes embedded into the economy. It’s one reason why central bankers generally fear anything that smacks of indexation.

Some central bankers have urged workers not to ask for significant wage increases, which seems a bit tone-deaf, and not very plausible, in the current economic climate. But what they’re really saying is – if wage growth is too high, we’re going to raise rates until it comes back down. And that’s why, while the rest of us might think about how our wages buy less than they did, central bankers might be thinking more about how 5% nominal wage growth is still too high to achieve their inflation goals.