What are we talking about? The ECB called an emergency meeting on Wednesday to discuss “fragmentation” in the Eurozone, and possible ways to mitigate that. The meeting comes in the wake of a widening of the spread between Italian and German government debt over the past few weeks. 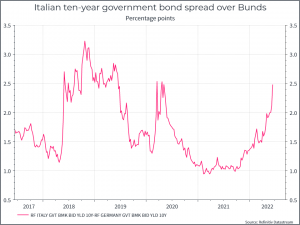 What do we mean by fragmentation risk? One definition we’ve seen (courtesy of the think-tank Bruegel) is “some countries might experience a significant widening of their spreads disconnected from economic fundamentals – because of its peculiar and possibly incomplete institutional framework, with 19 sovereign governments that each have their own fiscal policy but share one currency and one monetary authority”.

In her comments at the ECB press conference of June 9th, ECB President Lagarde said “we need to make sure that there is no fragmentation that would prevent the adequate monetary policy transmission throughout the entire region….fragmentation will indeed be avoided to the extent that it would impair that transmission”

If you’re an aspiring policy nerd, this is super interesting stuff. On the one hand, what do we mean by spreads that are “disconnected from economic fundamentals”? You can’t seriously claim that the credit metrics of Italy and Germany are precisely the same – or that a well-functioning market should price them the same without a joint and several guarantee (ie that German savers will support Italian bondholders). German government debt to GDP is sitting at below 70%, Italy sits at 150%. On the other hand, the ECB has committed itself since Mario Draghi to do whatever it takes to support the Euro.

This is not a new debate. In March 2020, Mme Largarde remarked that the ECB was “not here to close spreads” – and was duly criticised for it. But the world has changed and in 2022, it seems pretty clear that that is precisely what the ECB will try to do, albeit hiding behind the laudable goal of ensuring “adequate monetary policy transmission” – however that might be measured.

All this has been done before – the difference this time is inflation – which makes it a bit harder for the ECB just to print its way out of trouble and put the price of peripheral debt wherever it wants. Nonetheless, the ECB will presumably be hoping that a credible show of support for peripheral debt will help tighten spreads. It’s worked well in the past.

In the past, we’ve shown a simple spreadsheet on Italian debt dynamics. Please see an updated version below.

There are a couple of points worth making. The line to focus on is Gross debt as a % of GDP (in yellow). We can see the big jump in debt to GDP following the pandemic (from around 134% of GDP in 2019 to 151% in 2021). That’s something you’d expect to see in most developed markets. But if the debt dynamics are “unsustainable” then you’d expect that number to rise consistently during the forecast.

In this spreadsheet, there are a few drivers for that number. The cost of debt (here it’s called the implied interest rate), the primary budget surplus (government revenues less expenses, before interest) and the growth in nominal GDP – the denominator in that debt to GDP calculation.

We see in this case that a combination of a higher cost of debt and faster nominal GDP growth actually sees an improvement in Debt to GDP. But more pessimistic assumptions would produce a different outcome.

What does this tell us? First, we should stress that this is a very simple spreadsheet, rather than anything very definitive. But hopefully it illustrates the key variables we think are at play here. The gap between nominal GDP growth and the implied interest rate is pretty important. Historically, the economy grew very slowly, even in nominal terms, and that was putting pressure on the debt to GDP metric. But, if you can keep the cost of debt below that nominal growth rate and maintain a primary surplus – then you can see the debt / GDP metric fall over time. In this scenario, higher inflation becomes your friend, provided (and it’s an important proviso!) the ECB can keep a lid on bond yields and effectively keeps the cost of Italian debt below nominal GDP growth.

Where does this get us? The ECB looks ready to make some sort of commitment to peripheral debt. It might not appeal to market purists, but it’s been effective in the past. High inflation is a significant complication, even if it makes this type of financial repression more effective. The Central Bank will hope that its commitment alone will be enough to bring down peripheral yields, without actually having to spend too much money. That too has worked in the past, and even with great complexity, you’d expect it to work again.