What are we talking about? GDP growth data for 4Q21 in the US was released yesterday. It showed that growth was stronger than expected overall, coming in at a very robust 6.9% (annualised, quarter-on-quarter). The details were interesting (to some of us). Private consumption growth – usually the key driver for the economy – was a bit weaker than analysts had forecast, while rising inventories were a significant contributor (see the chart below). 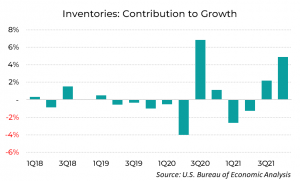 Is that a good thing? You don’t usually think of rising inventories as a positive – it often suggests that underlying demand is weaker than businesses might have expected. In this case, however, we actually look at rising inventories as a bit more positive. Global supply chains continue to struggle and we think that has fed through to higher inflation, at least in some cases, and that’s a key focus of central bankers, particularly in the US. So, we’d argue that rising inventories (at least in the GDP report) could be a sign that supply chain issues are beginning to see and that we might see that reflected in inflation beginning to normalise, albeit slowly, in the coming months.