What are we talking about? Financial investors aren’t epidemiologists. Unfortunately, they still have opinions, explicit or not. To re-use an old example, in April 2020, with market rallying, investors decisions told you something about what they believed about COVID, at least in economic terms. If they bought risky assets, they believed that the economic impact would be managed. If they sold, they took a different view. A seller could reasonably argue that since she/he had no view, the right thing to do was to sell. But relatively few investors have the option to move to cash and history tells us that timing your re-entry into markets is not easy. So, whether they like it or not, most investors are expressing some view about Omicron.

Where are we? Most obviously, we don’t really know. The variant is too new, the data is insufficient etc etc. But, with that important caveat out of the way, there are a few points worth making. First, the consensus seems pretty clear that the transmissibility is higher than in previous variants. Second, the severity of the variant is less clear – either because of the variant itself or because of healthcare interventions (vaccinations or boosters). Third, a combination of high transmissibility and low severity can still cause meaningful economic and social damage, at least in the short-term, as various services may struggle due to absences and lack of resources.

What about some charts? The charts below come from Our World in Data – and suggest a few interesting points. New cases have jumped, as have the number of tests. The positive test rate hasn’t moved very much, which might suggest that increased testing has been behind at least part of the increase in cases (given that some percentage of people might never know they’ve had the disease). 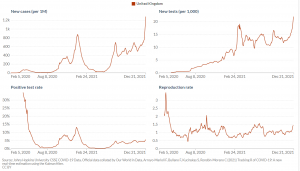 The next chart shows hospital admissions in the UK. We’d argue this matters a lot. NHS resources are a meaningful potential bottleneck. Happily, so far we haven’t seen a big increase in the number of hospital admissions. That might be a question of timing or a sign that the impact of Omicron won’t be as severe as previous variants. 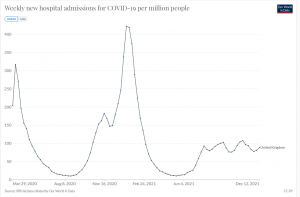 Finally, if you’re an optimist, you might look at the number of cases confirmed in South Africa – one of the first countries to identify the Omicron variant. The very early signs here are that the number of confirmed cases per million people has begun to fall, albeit from a very high level. 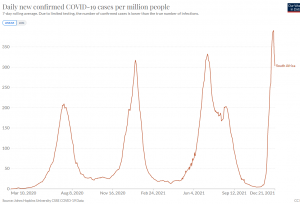 Where does this get us? The jury is still out, but there are some signs for cautious optimism. We’d guess that the key issue for financial markets, in the UK at least, will be around hospital capacity – and that’s the metric that we should probably focus on. Are hospital admissions set to spike?

News reports suggest we’ll have some further restrictions after Christmas to try to manage that further. For now, we’ve taken the view that the impact on financial markets from Omicron itself will be relatively short-lived and so we haven’t felt the need to make changes to our portfolio positioning. We’ll continue to assess that logic over the coming weeks.