What are we talking about? News reports around Evergrande, the embattled Chinese property company, suggest that it’s likely to default – and that views seems reflected in the current prices of its bonds. At the same time, the Chinese currency continues to strengthen against the dollar.

Evergrande: We’ve discussed Evergrande in the past. It’s a very large, highly leveraged Chinese property company that looks likely to default. The chart below shows the  The interesting part, from our perspective, is how quickly financial markets appeared to digest the news – and discount the likelihood that it would cause a major problem for either China, or the global economy. Maybe that reflects confidence in Chinese policy-makers to manage the fall-out.

Evergrandes difficulties raise broader questions about the sustainability of property-led growth and the extent of over-building. These are not new issues, but Evergrande has brought them back into focus. Chinese policy-makers seem to suggest that they are keen to move to a more sustainable growth model and perhaps Evergrande is a casualty of that. 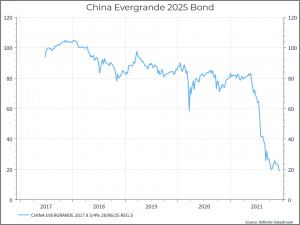 Currency Strength: At the same time, we’ve seen the Chinese currency continue to strengthen against the dollar. That’s helped our Chinese bond exposure, but has also raised questions about whether policy-makers could intervene to cause the currency to weaken. We’ve recently seen the Central Bank reduce reserve requirements in order to inject some more liquidity into the financial system and you might argue that could prompt the currency to weaken. 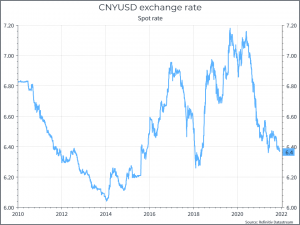 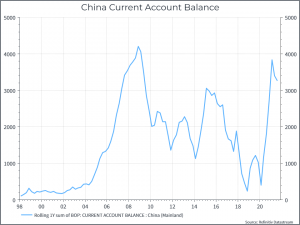 Fast forward to the pandemic, and those discussions have disappeared, at least for now. Strong global demand has meant that China’s current account balance has risen again – nearly back to its mid-2000s peak. At the same time, the currency has strengthened, which is what you’d traditionally expect (all else equal) as foreign currency flows into the economy. A positive trade balance might suggest that there’s no need to try to intervene in the currency markets. 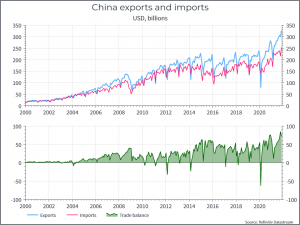 Why do we care? There are a few reasons. Most directly, we hold some Chinese bond exposure in our portfolios. Those positions have benefited from the strengthening yuan this year. If we believed that was going to change, we could consider reducing our positions. Less directly, a weaker currency might signal that the Chinese government was keen to drive stronger growth, despite its recent focus on more sustainable growth rates. That could have positive implications for global growth, commodity prices and perhaps for EM equities, which have struggled relatively speaking in 2021. The impact on inflation could be mixed – Chinese exports helped to drive down inflation for much of the past twenty years – and a weaker currency could have a similar effect again. But if inflation reflects strong demand and supply chain challenges then a boost to global growth could exacerbate the problem.

For now, we don’t think we need to make changes to our positioning. Our Chinese bond exposure remains quite limited (we’d have done better to own more of it this year than we did). But we’ll continue to pay close attention to the macro and policy drivers for the Chinese economy as we head into 2022.